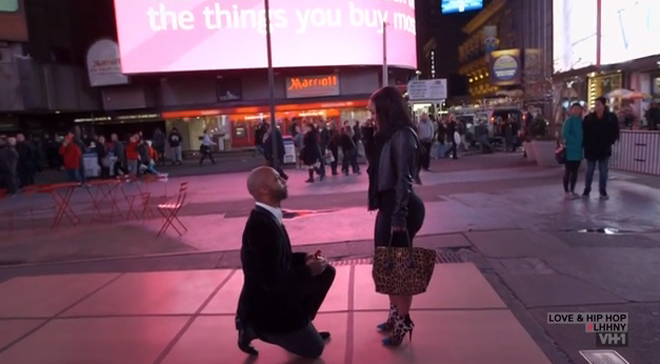 Lauryn Hill said it best: “You might win some, but you really lost one.”

After attempting to win Tahiry back episode after episode, Joe thought he could go big and win Tahiry’s heart back. While he’s clearly bipolar and a bit of a sociopath, Joe Budden does at least try hard.

Tahiry told him that he’d need to bring her the moon and the stars to win her back after he brought another woman into their bed, so he did the next best thing: He took over one of the megatrons in Times Square and got down on bended knee in the most famous plaza in the world.

Big booty Tahiry was the envy of every three-time, unwedded babymama as Joe the gentleman sweetly and romantically proposed to his eternal love. But Tahiry was thinking with her head and not her heart so she begged Joe not to ask her to marry him because she knew there was no way on Earth she could accept his proposal.

As Tahiry logically pointed out, just a few weeks ago he was creepin’ with another chick in their bed. And now two weeks later a ring and a fancy proposal is supposed to make all of that water under the bridge? C’mon, son.

Still it was a bit gut wrenching to watch Tahiry’s rejection wash over Joe’s face. UPDATE: Joe Budden is Done with Tahiry, Says He Will NEVER Propose to Her EVER Again

After Tahiry embarrassed the bejeezus out of him in front of half of the Big Apple, Joe had to run home crying to his mama. Faye J. Blige sweetly served her son some orange juice while he poured his heart out to her about picking up the pieces of his heart after Tahiry took a sledgehammer to it. Faye is a former drug addict and so is Joe, so I have to assume that the reason she’s treading carefully with him is because she doesn’t want to flip off one of those switches in his head. But seriously, a real mom would’ve done what Rich’s mom did last season: Called her son out for his behavior.

Instead, Faye just passively sipped her drank and said maybe Tahiry will come along sometime later. Gee, ma, thanks for the pearls of wisdom.

The funny thing is, Joe’s not the only one who runs to Faye after the proposal goes bust. Tahiry too pays Mama Faye a visit and it turns out to be quite an emotional occasion for her as she realizes this could be the end of the road for her and Joe for good.

Call me crazy, but maybe one of the reasons Tahiry and Joe can’t work out is because Mama Faye knows too damn much of their business.

Also, what the hell was Tahiry wearing on her head when she went to visit Faye? Is that a modified turban? Is she a genie who will grant Faye three wishes? Who knows. But one thing I do know: Joe and Tahiry are a wrap. At least for this season.

Saigon Makes Things Good with Erica J and Her Dad The driest, most uninteresting plot line in LHHNY sucks up valuable air time as Saigon first, visits with Peter to tell him therapy is going well and he’s mending fences with Erica J.

Next, Saigon decides that he finally is ready to make things right with Erica’s dad so he decides to formally ask if Erica J’s dad if she can move in with him. The way Erica spoke about her dad being “angry” and “kicking Brian out,” I thought this dude would be somewhat intimidating. Instead, his old ass looks like his bones could snap with a strong gust of wind. That man is old and he ain’t capable of controlling Erica’s ratchet, which explains how she ended up where she is today.

In the end, he readily accepts Saigon’s proposal to have Erica move in with him and they all smile warmly about how amazing Steven, Erica and Saigon’s son, is. Rest assured, these boring people will not be back next season if there’s another LHHNY. Erica might enjoy having her carpet munched by a fellow ladybug, but she utterly and completely melts around Rich every damn time. She wants the D and Cyn can’t give her what she wants. That’s why she keeps inviting Rich around, not because of her non-existent movie career.

But Chipotle Cyn is still convinced that this thing with her and Erica is real so acts like a wounded tom cat whenever Rich comes around.

Erica throws a released party for a book she’s selling (it must have a lot of pictures in it?) and she invites Rich, who inevitably gets under Cyn’s skin. At first, Cyn and Rich try to squash their beef one-on-one. Cyn pulls him aside and asks him to respect their relationship and stop kissing up on Erica in the studio. Rich smirks and doesn’t respond. Cyn ups the ante and calls him corny. Over, and over again.

Mena teeters over and sits between the two of them squealing about how she’s glad that they’re able to work things out and how they’re all one big happy family and Cyn drops that “corny” word on Rich again.

That’s when Rich snaps and he tells Cyn that he’s just letting her “borrow” Erica. That sets La Lezzie off something serious and Erica loudly asks Rich to leave. This of course is also a perfect excuse for her to chase him out the door and spend more one-on-one time with him.

Reading the signs, Rich grabs a hold of Mena and starts smothering her with kisses. Cyn catches glimpse of this and immediately goes off screaming, “THAT’S WHAT THE F**K I’M NOT GONNA DO.” Girl, bye. You knew Erica was still in love with Rich all along. Either accept your position as the third wheel or hitch your anchor to another ship.

So after Rich steals a few kisses from Mena and Cyn runs off with her dignity and self-respect sliding down her legs like Christina Aguilera’s spray tan at Etta James’ funeral, we catch up with Mena and Rich in the studio.

Mena is recording that 2000 and late dance track that she swears is gonna kill ’em in the clubs. After Rich layers her throat noise with some autotune, Erica steps out of the booth to chat with Rich. Faster than you can say, “White rice or brown rice?” Erica plops down in “daddy’s” lap and nuzzles that high-yellow Yogi Bear like he wants her to. The two playfully agree to a “business-only” relationship but we know that’s about as likely as Stevie J giving up his rat face look. Cyn will be a distant memory by next season. After realizing that he’d probably pushed Tara beyond the point of no return, Peter has decided he’d better get comfortable with the idea of life with Amina for good. So he decides they should get out of Amina’s studio apartment and get a real, grown-up, 2-bedroom joint.

Everything is going fine, until they come upon that second bedroom. Peter mentions that it’d make a perfect recording studio while Amina suggests it could also be a great nursery. Baby talk immediately sends Peter into panic mode and he starts sweating like Mariah Carey in the Nicki Minaj section of Kmart.

Peter immediately tries to walk back his commitment to Amina, which prompts Amina to buck on him and leave him for the 50th time. Seriously, if Peter was worried about “moving too fast” with Amina, he probably shouldn’t have wifed her, no?

But something amazing happens to Peter after the apartment hunt goes bust: Peter matures. In a moment of clarity, Peter catches up with Tara after she returns from a jog. He articulately and thoughtfully apologizes to Tara for destroying their relationship and sacrificing their family for his selfish pursuit of lust.

Although he can’t fix what he’s done, he understands now that what he did was wrong. This apology brings Tara to tears and she seems genuinely stunned by Peter’s candor and empathy. Hopefully both Tara and Peter can now stop their cycle of mutual dysfunction and destruction and focus on building a healthy co-parenting relationship.

Sidenote: Peter is rocking his YMCMB shirt in this scene. Does that mean his son Cory Gunz is still affiliated with Young Money? Cause we ain’t heard or seen him since his guest appearance on Wayne’s 2010 single “Six Foot, Seven Foot.”