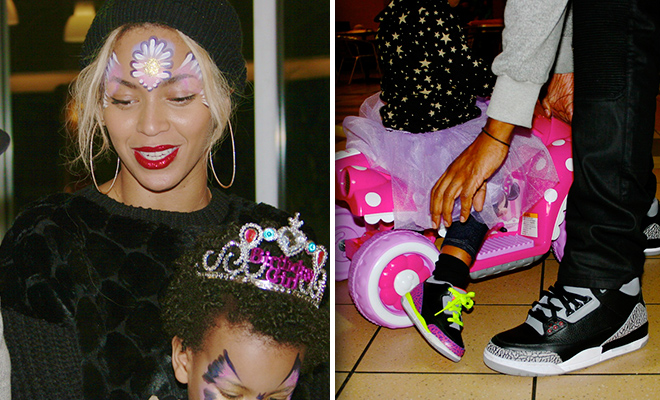 Beyoncé and Jay Z‘s daughter Blue Ivy Carter turned two years old on January 7th, and to celebrate the occasion, the famous power couple hosted a very expensive birthday party for their only child at a Miami wildlife habitat and theme park.

According to TMZ, on Blue Ivy’s 2nd birthday, Bey and Jay dropped some serious cash to shut down Jungle Island zoo — an indoor wildlife park and botanical garden in Miami — so that their little one could spend the day with lemurs, orangutans, kangaroos, penguins and other animals.

Park officials wouldn’t reveal the actual cost of shutting down the park, but TMZ says it costs $240 for a VIP safari tour for just ONE person, so you do the math. Beyoncé shared a number of pictures from the party on her Tumblr page, including some of the mother-daughter pair showing off their face paint and balloon animals, and others that revealed that her Destiny’s Child bandmates Kelly Rowland and Michelle Williams were on hand (all in face paint) for Baby Blue’s fun-filled day. One photo shows Blue — wearing a “Birthday Girl” princess tiara, a black jacket with gold stars, a purple tutu and matching sneakers — driving around in her new gift, a Kid Trax Disney Minnie Mouse Hot Rod, while another shows producer Timbaland’s 7-year-old daughter Reign Mosley gifting Blue with an adorable handwritten card that read, “Baby Blue you are a princess … I hope you have a happy birthday.”

In addition to Blue Ivy’s birthday pics, and photos from Mama Tina‘s 60th bday party in New Orleans, there’s also another set of photos on Beyoncé’s Tumblr page showing the singer as she and Jay kick off their New Year’s Eve celebration with BIC before heading to Diddy‘s Ciroc the New Year party at the Versace mansion in Miami, which also looked like a lot of fun.