GOSSIPONTHIS.COM Celebs Beyoncé and Madonna to Perform at 2014 Grammy Awards? 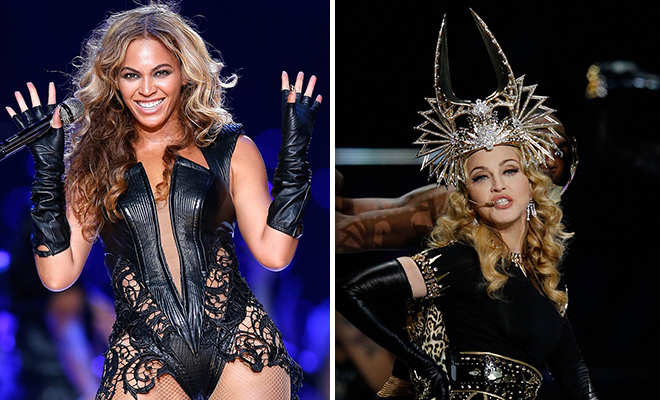 Though nothing has been confirmed yet, rumors are circulating that Beyoncé and Madonna are both scheduled to hit the stage next Sunday night at the 2014 Grammy Awards!

But according to a report from the Los Angeles Beyonce, Beyoncé and Madonna are expected to take the stage at the ceremony, which will be held on Sunday, January 26th at the Staples Center in Los Angeles.

Late last year Beyonce pulled off one of the best-kept secrets in recent music history when she stealthily released her self-titled album without as much as a hint.

The Grammys is where she will make her first televised performance in support of the project — which shattered iTunes records upon its release in December — according to a source with knowledge of the matter.

Madonna, however, is expected to pop up and lend guest vocals during a performance from one of the night’s nominees, an additional source confirmed.

“Let’s put it this way … we have a really great history that goes back to the early days of Destiny’s Child,” Ehrlich added. “I love working with [Beyonce]. She’s incredible. She is so into what it is that she does and making sure that everybody who sees her walks away saying, ‘wow.’ ”

“Should she be on the show this year?” he continued. “I would think that the potential is there for that kind of moment.”

This will be Beyoncé’s first performance since releasing her latest self-titled album, so yes … THIS IS A BIG DEAL!

Are you excited for a possible “surprise” Beyoncé performance at this year’s Grammys? Let us know in the comments!