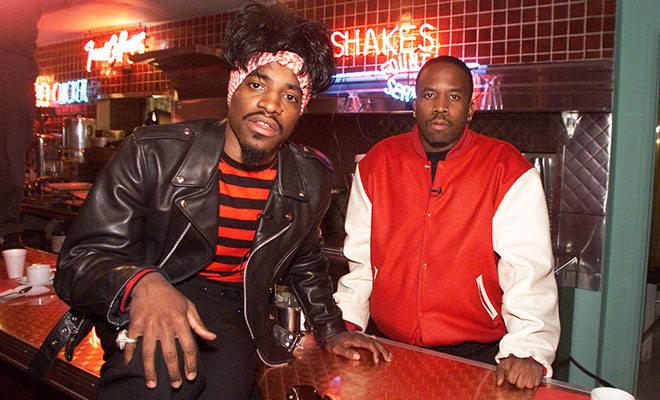 We already know that “technically,” Outkast is back, but our favorite Hip Hop duo may officially be back. Like, FOR REAL FOR REAL!!!

Just last week, Big Boi made the announcement that he and Andre 3000 would be headlining Coachella 2014.

And now, Queen Latifah, who formerly managed the group, has spilled the beans on an upcoming Outkast album.

After Stern asked Latifah, referring to Outkast, “Whatever happened to them?” she answered, “They’re chilling … They’re doing movies, and they’re about to work on a new album.”

Though she was quick to add “I don’t manage them anymore,” Latifah didrep OutKast early in their careers as part of her Flavor Unit Management enterprise.

Of course, there’s been no mention of a new album from anyone currently associated with the group, though earlier this month, Organized Noize producer Rico Wade did reveal he was sitting on a bevy of unreleased Andre 3000 tracks, including a song called “Benz Bitch,” a track supposedly slated for Future’s upcoming sophomore album Honest.

If there is a new OutKast album coming, it will be the first since 2006’s Idlewild, which was released after a series of lengthy delays, and failed to match the massive success of their 2003 double-disc opus Speakerboxxx/The Love Below, which still reigns as hip-hop’s best-selling album a decade after its debut.

In the time since, Big Boi has released a pair of solo albums, while Three Stacks has remained busy contributing a series of high-profile verses.

We hope this is real and Queen Latifah isn’t just pulling our leg … we’ve all been waiting on this for far too long!