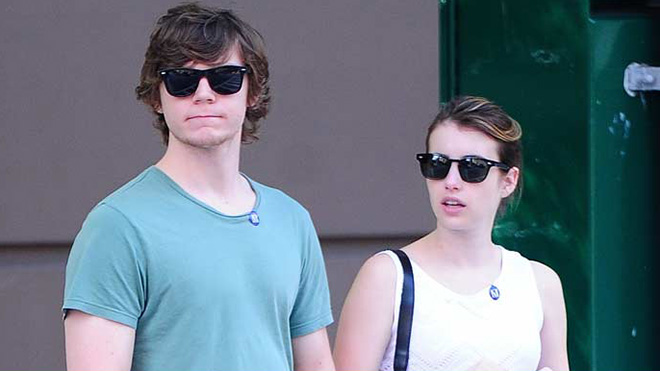 Sources tell Extra that Peters popped the question with a pink gold diamond ring over the holidays in New York City, and he and Roberts spent New Year’s in London.

The couple — who currently star alongside each other in “American Horror Story: Coven” — have been dating since 2012, and this past July, Roberts was arrested for an alleged domestic violence incident that left Peters with a bloody nose and a bite mark on his body.

Emma Roberts Arrested for Beating Up Her Boyfriend Evan Peters

Roberts was released a few hours after her arrest because Peters didn’t want to press charges. Her reps later called the incident a “misunderstanding” and said that the couple were “working together to try and move past it.”

So either they’re in couple’s therapy, or maybe Emma is in anger management, or something. But whatever they’re doing, it must be working. Though we have to admit, it is a bit disturbing for a young couple with a history of abuse to be getting prepared to tye the knot, just six months after one of them was arrested for beating up on the other.

Meanwhile, with the exception of her stepmom, Emma Roberts’ family appears to be in the dark about her engagement.

Emma’s stepmom Eliza Roberts and her step-grandma Lila Garrett were at Il Buco retaurant in Beverly Hills Tuesday night when a TMZ cameraman offered their congratulations, but clearly Eliza was the only one who knew, because she was the only one who didn’t have a stone-faced reaction.

Roberts — who is the niece of actress Julia Roberts — was also spotted without her engagement ring in an Instagram photo she shared Wednesday, as well as photos snapped of her on the set of “American Horror Story: Coven” … but it could be because she’s shooting a TV show and it would be pretty weird for “Madison” to have an engagement ring just appear out of nowhere on her ring finger, wouldn’t it? Yes, it would.