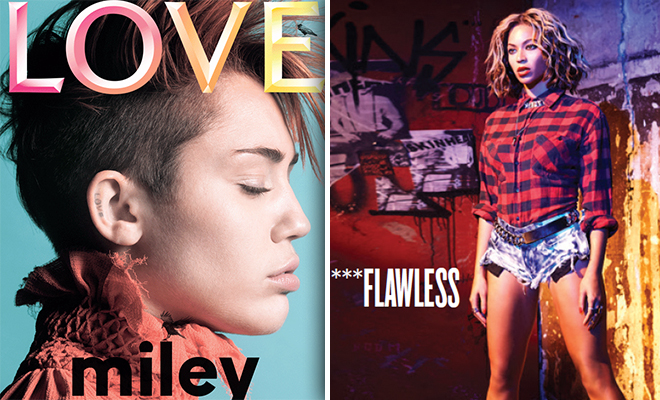 Miley Cyrus was one of the most talked about Pop stars in 2013, and 2014 already looks like it’s not going to be any different.

The Internet was abuzz with news yesterday that Miley had some very not nice things to say about Beyoncé in an interview with Love magazine.

The actual issue hasn’t been released yet, yet the celebrity website Hollywood Life posted quotes allegedly taken from Cyrus’ interview with the UK publication, in which she purportedly called herself the “best” and a “total package,” compared to Beyoncé, who she reportedly referred to as old and washed up:

“Beyoncé has been a big inspiration to me but she’s been out for such a long time. She’s so talented and I think she’s at the top of the game now but people are always looking for new blood and that’s what I bring to the game now, new blood. I got the total package, you know? The curves, the rhythm, and the voice. I’m just the best.

“As Beyoncé grows into motherhood and all the crap it does to your body, it will create a vacuum for fresh young faces to rise up and no one else can properly fill that void right now. I’m the only white female singer that could fill that slot right now and do it right, you know? I just feel like I was born for this time right now. All things must start and end and I hope to have the same successes as other icons in the game when my run is over. But for now, my run is just starting.” A number of sites (including Perez Hilton and The Daily Mail) picked up the story and its accompanying quotes, but some either deleted or updated it after Girl Billy Ray caught wind of it and fired off a series of tweets saying that she would NEVER diss Beyonce, because … DUH!

According to the serial twerker, those quotes were “made up,” and Love Magazine later backed her up, confirming that the quotes Hollywood Life posted were indeed fabricated.

Perez Hilton even joined in on the Twitter “discussion” and admitted that he found the quotes on The Daily Mail, while also trying to kiss Miley’s ass a bit too.

See the tweets below:

That quote people MADE UP about Beyonce just made me lol! Imagine if I said I got “the looks and the curves I’m just better!” Bahahahhaha

How are people allowed to make up shit & then out quotes around it saying I said that shit! WTF!!?!

Thank god I just woke up from this nightmare.

don’t worry. getting 2 the bottom of this shit. making the liar retract the statement. U can cause ALOT of drama but NOT between me & B!

@gypsyhearttour where was that even from?

@gypsyhearttour Hahahajajahahaha that made me laugh! It’s fucking creepy! I don’t even talk like that. Hahaha

@MileyUpdateEU nah I choose 2 ignore his existence. The world would b a much better place if every1 did the same. Maybe then he’ll disappear

@MileyCyrus If ur pointing fingers, the Daily Mail’s site is where I found those quotes. You may not like me, but I’d never make quotes up!

@MileyCyrus P.S. I’ve been very supportive of your music and movement, and it’s not contingent upon you liking me. #PeaceOut

@gypsyhearttour I thought she may have been high while speaking to them. And A LOT of legit publications had run the quotes. x

@MileyCyrus never said anything to us about Beyonce, the quotes were made up and we’re trying to get to the bottom of where this came from

WE ALL LOVE BEYONCE

And that’s that. Miley Cyrus would never ever ever say anything bad about Beyoncé, because … “WE ALL LOVE BEYONCE.” Also, because she’s “flawless” and “woke up like diz.”