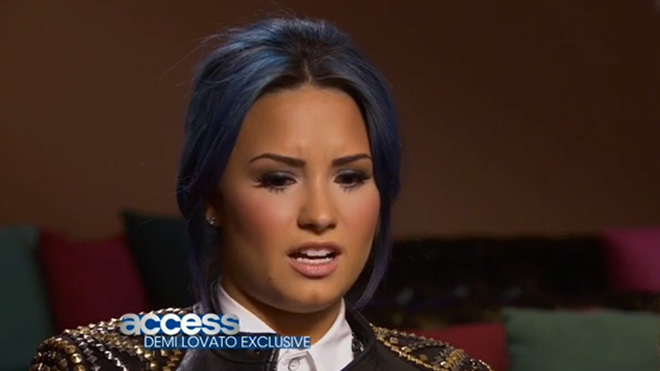 Now that her past is clearly behind her, Demi Lovato is opening up about her former drug addiction and the extreme lengths she went to keep it up.

In  recent interview with Access Hollywood, the “Heart Attack” singer and “X Factor” host admitted to being addicted to cocaine at the age of 19 and not being able to go 30 minutes without it.

She said her addiction was so bad that she would sneak it onto airplanes, and when nearby passengers would fall asleep, she would sneak away to the bathroom and do her blow.

“Something I’ve never talked about before, but with my drug use I could hide it to where I would sneak drugs. I couldn’t go without 30 minutes to an hour without cocaine and I would bring it on airplanes,” she revealed. “I would smuggle it basically and just wait until everyone in first class would go to sleep and I would do it right there. I’d sneak to the bathroom and I’d do it. That’s how difficult it got and that was even with somebody [with me], I had a sober companion, somebody who was watching me 24/7 and living with me [and] I was able to hide it from them as well.”

The former Disney star also battled with an alcohol addiction and after turning up at the airport at 9 a.m. with a sprite bottle filled with vodka, that’s when she realized that she was in desperate need of help.

“I was going to the airport and I had a Sprite bottle just filled with vodka and it was just nine in the morning and I was throwing up in the car and this was just to get on a plane to go back to LA to the sober living house that I was staying at…I had all the help in the world, but I didn’t want it,” she said looking back. “When I hit that moment I was like, it’s no longer fun when you’re doing it alone. I’ve really never talked about this stuff before… I don’t know if I should be sharing this.

“I think at 19 years old, I had a moment where I was like, ‘Oh my God… that is alcoholic behavior. [It’s] no longer, I’m young and rebellious and out having fun, it was, wow, I’m one of those people…I gotta get my s*** together,’” she explained.

Demi’s mom Diana also took part in the interview and admitted to being in denial for some time. She said that while she “suspected” her daughter was doing drugs, when she was told otherwise, she believed it because she “didn’t actually see her.”

“I suspected [she was using drugs]. It’s like any other parent, when you see things, when you see signs you don’t want to believe that’s what actually going on. So when they’re telling you that’s not what is going on… you want too badly to believe them and I think for a long time I was in denial,” she told Kit.

“I didn’t know. I didn’t actually see her, so when she said, ‘Oh no, There’s nothing going on. I’m not using, I’m not drinking, I wasn’t doing any of these things,’ Why was I not to believe her?” Dianna continued.

Demi also spoke on having an eating disorder since the age of 8 or 9.

“It was always there, but then I just acted on it at around 8 or 9 years old. I started overeating, compulsively overeating. I would bake cookies and then eat the whole pan. I went from doing that to being unhappy with my body. I went to just completely starving myself and that turned into throwing up and starving myself and it was just this crazy battle going on inside of me,” she said looking back. “It got really difficult [and] I would throw up and it would just be blood and it was something that I realized if I don’t stop this, I am going to die.”

Read more from the interview at AccessHollywood.com

We’re glad Demi is able to take everything she’s been through and share it with others. Big props to her!

Lovato plans on releasing a memoir detailing her struggle with addiction and her ongoing recovery. And just in case you were wondering whether her fans still love her, they do.

Here are some Twitter reactions from a few of her supporters:

So much respect for @ddlovato for being so honest and open http://t.co/ScG3i7OqVO

http://t.co/4t7aE1nIOT she become so strong & gone the through so much and is sharing it to help us this is just.. #proudlovatic @ddlovato