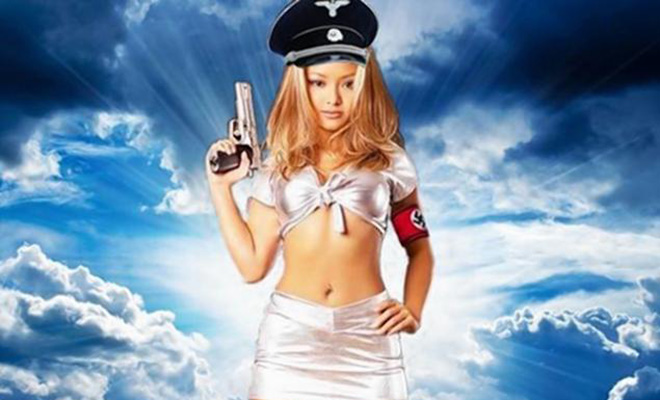 Professional bisexual Tila Tequila is mostly known for two things: being a liar and doing the absolute most. And earlier this week in a series of ridiculous Facebook rants, she did a little bit of both.

Since the former reality star’s new claim to fame is being an obnoxious “Internet troll,” she has to live up to her name right?

According to the New York Daily News, Tequila kicked off her interesting evening by posting a picture of herself on Facebook wearing a “swastika arm band, Nazi uniform hat and silver stripper getup while standing in front of Auschwitz.” She later deleted the image, but not before sharing some words of empathy regarding Adolf Hitler, who she described as a “special and sweet kid” who was rejected by art schools and later “bullied.”

She also drew comparisons to her own life, describing how she felt “mocked” and “rejected” by Jews when she recently tried to convert to Judaism:

Let me tell you all a very bittersweet story. Let’s just call it: “Karma” – So once upon a time in a land far away there was a special and sweet kid who had a dream to become a painter. He was a brilliant artist and was ahead of his time. He had hopes, and dreams just like we all do.

Unfortunately, the art schools did not feel the same as he and they rejected him. Fast forward a few years later he was roughed up and bullied on top of that by the same people he once loved. His Name was Hitler.

Then fast forward a few generations, there was once upon a time a young lady who also had the same hopes and dreams as Hitler did. She probably loved the Jews as much as they hated her. She still loved them. As a matter of fact, the majority of her friends were Jewish.

She loved them so much and just wanted to be accepted by them that she even tried to convert to Judaism, but no. It was still not good enough for them. They mocked her, rejected her and laughed at her through and through when all she ever did was show them her love.

Her name was Tila Tequila.

In response to numerous comments from people on Facebook calling her out for supporting a murderer like Hitler, she posted this:

People, people, please listen with an open heart and mind because so many of you are filled with HATRED that it has BLINDED you from the TRUTH THAT GOD HAS TRIED TO SHOW YOU OVER & OVER YET YOU REFUSE TO BELIEVE IT! Yet you still pray and ask for God’s forgiveness when you are SO VILE and UNFORGIVING towards others? I never said I hated anyone, but just because I fee sympathy, compassion, and forgiveness for others such as Hitler means I am now a monster? All for trying to open your eyes to the truth that Hitler was NOT as bad as he was painted out to be?

God’s wrath shall come upon you all soon who do not learn how to forgive and forget and spread LOVE in this world. God is watching you and I am God’s messenger. Mock me all you want. YOU WILL regret doing so! Remember when Jesus also told the people he was a messenger???? Hmmm… Anyway this picture is more proof that EVERY ETHNIC PERSON WAS INVOLVED IN WWII… NOT JUST GERMAN PEOPLE! SO WAKE UP AND STOP BEING IN DENIAL!

Blacks, Asians, Jews, Middle Easterners and so on… ALL WERE NAZIS!!! But did you ever hear about this? NO! Because the Zionist Cabal doesn’t want you to know the truth but I will speak the truth for GOD since NO ONE ELSE HAS THE BALLS TO! Go ahead.. keep stoning me. You will regret it. May God Have Mercy On you all! You complain about wanting to see change in this world yet YOU STILL ACT LIKE BARBARIANS!!!! I despise the humans. God tells me to take it easy on them… but I despise most of them to be perfectly honest.

The former Myspace Queen, who now refers to herself as “Goddess (née Queen) Tilisis” on Facebook, acting as a messenger spreading the word about the illuminati, also said in a previous post that “Fast & Furious” star Paul Walker’s recent fatal car crash was a “ritualistic murder” and claimed that unidentified forces murdered her “wife” Casey Johnson.

I know who killed Elisa Lam. The Mysterious Video of the Girl in Elevator who ended up “mysteriously dead” at the bottom of a closed off water tank. – I believe I am the only person on this entire planet who knows what happened. I knew it the first time news of the strange video started circulating the internet weeks ago. I have just kept my mouth shut because there is a lot more to it and of course…. cases like this.. I just did not want to draw any attention to myself but I know exactly why they did it and yes it was indeed a ritualistic murder. Just like Paul Walker’s. However, for Lam’s case I have so much detail that it may blow your mind. I know it blew my mind and that’s why I was debating on weather or not I should blog about it as I did not want to have anything to do with it… except for the fact that this ritual murder was directly linked to my ritual murder last year….. So… kinda makes it hard for me to talk about, but …….

And just in case you want to call Goddess Tilisis “crazy” or “nuts” or any other word that describes a person who is just plain “wacky,” there’s a response for that:

As the true enlightened beings who have returned to this planet to try to help mankind. We see that you are still not ready for positive changes yet. Look at your barbaric behavior. You scream you want change, yet you have not changed one bit for thousands of years, and for that I shall halt on trying to teach you the ways of the true Enlightened beings.

I am from Sirius B and of Lyran descent. When you Earthlings are ready for true positive change then you need to be that change before any of the gods return to help you any further. We have been watching for a very, very long time. My council says that you are not ready yet and I must agree. Very few will make it past this Luciferian soul harvest.

Someone get this girl a bottle, no scratch that, a CASE of something from this list of crazy meds and a lifetime supply of hugs, because … wow.