GOSSIPONTHIS.COM News Man Jumps to His Death from Mall Balcony Because His Girlfriend Wouldn’t... 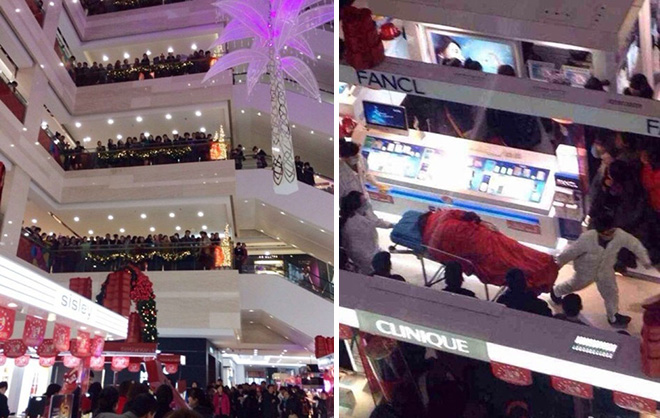 There’s only so much a man can take.

Fed up with his girlfriend’s seemingly never-ending Christmas shopping, a man who just could not take going to not even ONE more store (for more shopping, of course) committed suicide over the weekend by leaping from a seventh-floor balcony at a mall in China.

The man, identified as 38-year-old Tao Hsiao had reportedly been shopping with his girlfriend at the Golden Eagle International Shopping Center in Xuzhou, China for more than five hours when the girlfriend insisted on checking out just one last shoe store.

Apparently that request pushed Tao over the edge, and he responded by throwing himself over the ledge, literally. “He told her she already had enough shoes, more shoes that she could wear in a lifetime and it was pointless buying any more,” one eyewitness was quoted as saying. “She started shouting at him accusing him of being a skinflint and of spoiling Christmas, it was a really heated argument.”

Security cam footage from the mall shows Tao throwing his shopping bags over the railing before jumping onto the cosmetics section seven floors below. No bystanders were injured in the December 7th incident, and the man died instantly, a mall spokesman said.

“This is a tragic incident, but this time of year can be very stressful for many people,” the spokesman added.