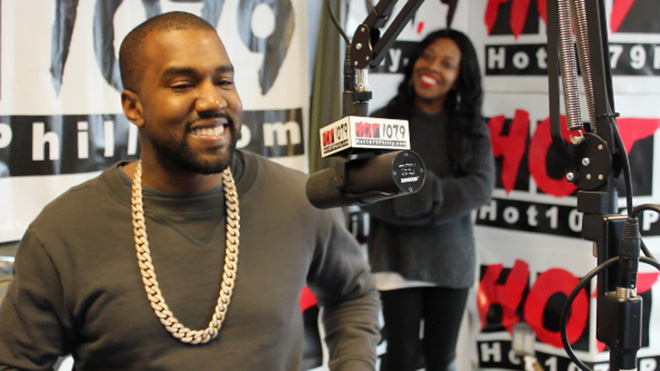 It’s one thing to go after Jimmy Kimmel, but to throw shade at the President of the United States definitely requires some big gonads.

And apparently Kanye West owns a pair of big gonads because he straight up dissed President Obama on the radio, basically telling the POTUS to keep his name and Kim Kardashian’s out of his mouth.

During an interview on Philly’s Hot 107.9 Morning Show Monday (WATCH ABOVE & BELOW!), Kanye was asked about President Obama calling him a “jackass” after the Taylor Swift incident, and whether or not he would “break bread with” the Commander-in-Chief. This is what he told them:

“Oh, you talking about how he used to come and visit me and my mama and tell me he’s about to run for president? I just think that we’re pop icons, and the president likes to use that type of thing just to be down.

“People was fine with me being everyone’s punching bag for about five years — ‘This is the person we love to hate, so if you want to distract people from everything that’s going on … just say you hate Kanye and there’s going be 30 other people who say they hate Kanye.’

“That was kind of my position in culture and he kind of used that too — ‘Oh, he’s a jackass’ — because that’s how the world felt. I don’t care if someone’s the president or not. I care about thoughts and how you helping people and what you bring to the world.

At this point, Kanye was interrupted and told to “leave Michelle alone.” His response?

“Well, uh, I think he should mention my baby mama’s name, because we both from Chicago. But no, I’m not gonna mention him no more, I’m past that. That’s out my thoughts. That’s lowering my priority of thinking at this point.”

The Obamas couldn’t care less what you think about them. They have bigger and better things to worry about, being the POTUS and FLOTUS and all.

In fact, this is exactly what happened when someone told Mrs. Obama what Kanye said about her: