GOSSIPONTHIS.COM Celebs Patti LaBelle: 6 Things We Learned from Her “Oprah’s Next Chapter” Interview 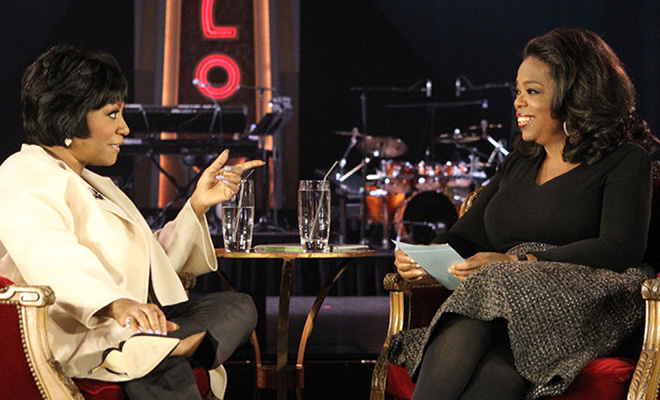 Ms. Patricia Louise Holte-Edwards, better known by her stage name Patti LaBelle, sat down with her good friend Oprah for one of those “Next Chapter” interviews, and quickly reminded the world that she is not only A, but THE supreme diva.

Throughout the sit-down, Ms. LaBelle — who, by the way, has nothing to promote at the moment, she just wanted to chat with her homegirl O just because — tells it like it is as she talks about a wide range of topics, regularly scrunching her face up at Oprah’s questions and often responding to them with a “What?!?” and/or a matching side-eye.

When Oprah asked the renowned Grammy Award-winning American singer, author, and actress — who has spent over 50 years in the music industry — if she had ever been booed at Harlem’s legendary Apollo Theater, where the interview took place, and where she she got her start in music, LaBelle snapped back with a “What?!? Girl who you talking to?” and Oprah couldn’t do anything but laugh.

Here are six things we learned from Patti Labelle’s “Oprah’s Next Chapter” interview!

1. She knows and accepts that she is a legend.

When Oprah mentioned her Legends ball, where she has celebrated great black women who have served as inspirations for her, she asked if LaBelle, who has been honored at the ball, whether or not she considered herself a legend.

“Yes, I really do,” said Patti frankly. And when Oprah asked if she has truly accepted the title, she resounded with an incredulous “What?!?”

2. She doesn’t own a cell phone, and she is not going to speak on yours to tell your great auntie hi.

Patti LaBelle is 69 years old, and doesn’t give a damn about being up on the latest technology. She doesn’t even own a cell phone!

“I don’t tweet, Twitter, email, Facebook, look book, no kind of book,” LaBelle told Winfrey. “I have a land line phone at my home–that’s the only phone I have. If my phone rang every day like everyone else around me, I would lose my mind. Homie don’t play that.”

And while she loves her fans, when they approach her with their phones to say hello to a friend or family member, Ms. Patti cringes. “I don’t do the phones because I don’t want no germs, baby, but tell her I said ‘hey.’ I’m not speaking on your instrument,” she said.

3. She is “never” getting married again. Ever.

The last time LaBelle sat down with Winfrey, she had just split with her husband of 34 years, Armstead Edwards. When Winfrey brought up the split again, LaBelle said, Asked if she would ever marry again, as Tina Turner did earlier this year at 73, LaBelle was firm. “Congratulations, Tina darling, but Patti’s not going to go there every again–never. Why would I at 69?”

The last time Patti and Oprah sat down for an interview, she had just split with her husband of 34 years, Armstead Edwards, and when Winfrey brought up the split again, LaBelle said, “You had a problem with that, you had an attitude, you were about to cut him down.”

Oprah asked Patti if she would ever get married again, as Tina Turner did earlier this year, at age 73. Her response? “Congratulations, Tina darling, but Patti’s not going to go there ever again — never.”

4. She has a swimming pool, but doesn’t own a bathing suit.

It sounds weird, but it’s true. Being the diva that she is, Patti LaBelle can own a swimming pool and never take a swim, because she’s Patti LaBelle.

Asked what makes her happy, she said, “Flowers, walking my little shih tzu, walking in my pool–though I can’t swim. I’m not swimming. I don’t even have a bathing suit. I’m walking in my t-shirt and my short pants.”

5. She once thought Diana Ross didn’t like her, but Oprah helped fix that.

Patti LaBelle spent several years thinking that Diana Ross didn’t like her because of various rumors she heard through the grapevine.

“We went years without seeing each other, talking on the phone,” Patti told Oprah, who had sat the women together at her Legends Ball of influential African-American women.

“We exchanged phone numbers and started talking to each other after the Legends Ball,” LaBelle said. “There was a big mess about being people thinking she didn’t like me and I didn’t like her. I love her.”

If there’s one thing we learned from her interview, it’s that Ms. Patti has not a single fuck to give, a right that she has earned, and who is gonna check her, boo? She says she has nothing to prove, but divas cry too.

“I’ve been shut down, run down, talked about, dogged out, but that never stopped me from the being the true me that’s here and will be here,” she said, choking back tears. “I can never not be happy about my life–all the things that I’ve been in and out of and through. I’m so strong now, Oprah, I don’t need to worry about anything. I have nothing to prove.”