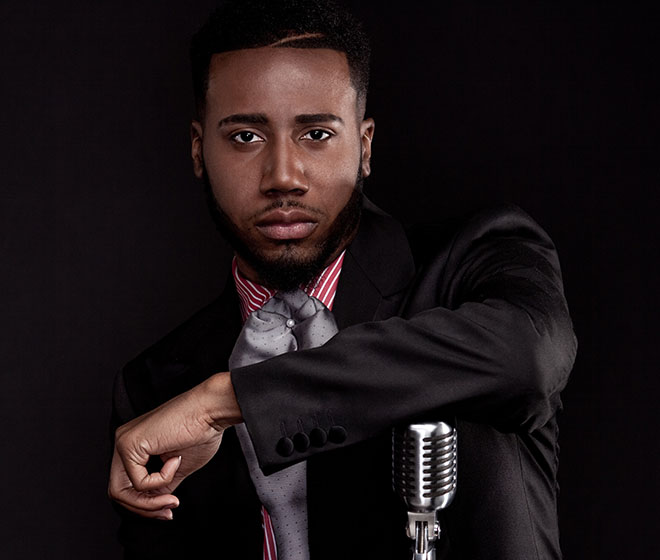 An explicit video clip showing gospel singer Kevin Terry doing things with his mouth that your aunties at church would not approve of has leaked online.

Terry, an up-and-coming gospel artist who leads the singing group “Kevin Terry and Predestined,” was allegedly videotaped performing oral sex on another man, and the video footage, which was originally posted to the website FinallyBrave.com, has been making the rounds on the Internet all week.

Of course we will not be sharing the video here, but you should be able to find it yourself if you know where to look. In response to the leak, Kevin posted a scripture-heavy statement on his Facebook page, neither confirming nor denying whether it was him in that videotape performing a mic check (with no stage), but he did talk about being “attacked.” Like he attacked that… nevermind, we won’t even go there. Adding more fuel to the fire was Terry’s “friend” Lil Mo, who basically confirmed that it was him in the video by weighing in on the incident on Twitter: And guess what? She didn’t even stop there. She spoke with the blog The Jasmine Brand about the situation and defended Kevin, calling him a “good guy” and essentially further confirming that it was INDEED, without a doubt, him on the tape.

“I haven’t spoken to him directly,” she said. “I did get word he is mortified. I just want to hug him and say he will be okay. I can only imagine how he must feel. This is a low blow not only to his privacy, but some of the ‘deep and spooky’ church folks are not praying for him. The comments I’ve seen people post, are just, hurtful.”

Asked whether or not she thinks an apology was “necessary” on Terry’s part, Lil Mo said: “No apology was necessary. But a damn search warrant and immediate arrest and ass whoopin’ needs to be handed to the ‘messy queen’ that sent him the email saying they was about to destroy him. Then leaked this. That is EVIL. Vicious. An unnecessary attack. I hate bullies yo. Let me calm down. I’m emotional. Kevin is a good guy.”

She was then asked to rate the man’s performance in the clip, and she did, because, you know, “FRIENDS”:

“I give it an A- only because he didn’t shed a tear. Nor did he gag. No shade. But when the smoke clears, I hope he can get a fresh start. We all done did some mess that if it leaked, babyyyyyy!”

SMDH… Who needs enemies when you have FRIENDS like that?

A number of people have taken to Twitter after viewing the explicit video that has become viral where Terry is engaging in a sexual act with an anonymous male. Some people believed the video was detrimental to the image of Christians.

“Just saw the video of gospel singer and pastor Kevin Terry..,” one person tweeted. “Wow seriously and they wonder why people losing hope.”

Another individual suggested that Terry was not the only person engaging in homosexual acts in the black church community tweeting, “I hope black folk don’t think ?#KevinTerry? is the only one??”

Still, others agreed with Lil Mo and thought that Christians should be praying for Terry instead of condemning him.

“It’s a shame that our people take Joy in embarrassing and exposing situations like Kevin Terry’s,” the individual tweeted. “These saints man!! Smh!!”

Yet another person prayed that Terry could find forgiveness.

“Prayers for ?#KevinTerry? I hope he can get in church or even on his own and ask for forgiveness we are not perfect,” the tweet reads.

Deitrick Haddon, the gospel singer and minister who stars on the Oxygen docu-series “Preacher of L.A.” also reacted to the video after one fan questioned him about it.

“Comments on Kevin Terry,” one person asked Haddon on Twitter.

Haddon responded, “Don’t know who that is…never heard of him!!”

Speaking of Deitrick Haddon, he too recently got caught up in a scandal of his own after a woman he was alleged to be in a previous relationship with leaked naked photos of him (from 2008) online.