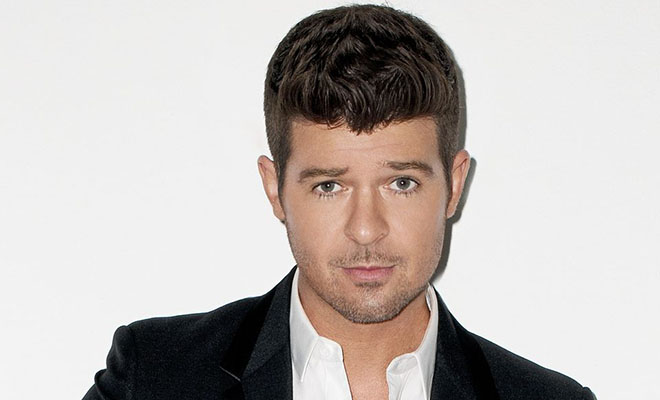 Robin Thicke is grossing out and pissing off numerous women and others who love them thanks to his latest interview with ELLE magazine.

The artist may be a talented singer-songwriter, but many feel he served douche realness in the new interview. The issues are as follows: Him referring to women as “Ms. Alabama” and “Ms. Dominican Republic” and describing his wife as his property.

And he’s a wee bit cocky. I’ve been a longtime fan of Robin — ever since he was riding around in his bike in NYC looking like Jesus. Popularity hasn’t been good for his public image, though, as it has exposed things we wouldn’t have ever known. Oh well.

Your father [Alan Thicke] has a reputation as a ladies’ man. What was your childhood home like?

“My dad was single my whole pubescent period. [Laughs] He had Ms. Alabama, Ms. Dominican Republic—every week. I was like, Dang, Pops. He had an indoor Jacuzzi, and he frequented it. The first time I saw a naked woman was when I went to take a shower one morning before school. I was like, Who is this girl in my shower?”

What went down when he was traveling?

“I had lots of weekends alone in a huge house with a tennis court, so I’d invite my buddies over. It’d be video games, basketball, chicks, and swimming. I was like a college kid when I was 14.”

What did your father teach you about women?

“He was always very intuitive. And very smooth. He didn’t really tell me what to do. He told me what not to do, which is actually more important.”

OK. What did he tell you not to do?

“We were on vacation and some pretty girl walked by. I started ogling her like a 12-year-old boy, and he said, ‘I know she’s pretty, but you stared at her and followed her across the room. What if there’s a prettier girl sitting two tables away? Now she’s not going to feel special. She’ll say, ‘You look at all the girls like that.’ You’ve gotta play it cool so you don’t look like you’re desperate.'”

You told Howard Stern that you lost your virginity at 13. Is there anything you’d do differently?

“Make it last longer than 30 seconds.”

Was she someone you cared about?

Do you get jealous when [your wife Paula Patton] has to kiss another man on-screen?

What do you do with that jealousy?

“I support her first. I never make it an issue while she’s filming. And then when she’s done, I ask a few questions. Oh yeah, you like that? Then it’s gone. It was harder when I was younger. Now I’d be like, Okay, come on home. Me and the baby are watching The Croods.”

Do you and your wife ever fight?

“[Laughs] For everybody. Just lock it up! If you don’t fight, then you don’t care. If you’re not fighting for the relationship, you need to move on.”

The unrated music video for “Blurred Lines” features balloon letters that spell out Robin Thicke Has a Big Dick. You also give your manhood a shout-out in “Give It 2 U.” I’m sorry, but how big is this thing?

“We joke around. If someone’s got a great outfit on, it’s like, ‘Oh, you’re big-dick swingin’ tonight.'”

“Listen, compared to my son, I’m packing. If I’m next to LeBron James? It’s probably not quite as impressive.”

How do you keep the spice alive?

“The spice is not our problem. We’re overspiced. We could probably take a few spices off the shelf.”

Do you listen to your own music in the bedroom?

“Yes. In fact, she likes to do it more than ever now. Sometimes she’ll even play groupie for me.”

When it comes to nudity, are we too conservative as a nation?

“In our household, nudity is not frowned upon. We’re much more free with ourselves.”

Read the interview in full over at ELLE.