GOSSIPONTHIS.COM Celebs Nicki Minaj Talks “Idol,” Sexism and Being A Woman In Rap with... 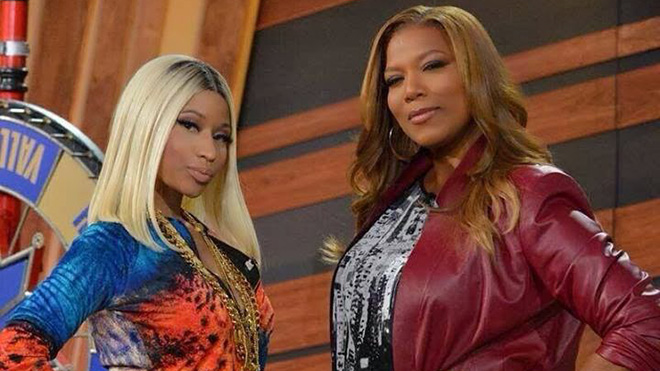 Nicki Minaj met her future during an appearance on The Queen Latifah Show. Of all the female rappers who have come before Nicki Minaj, I imagine Queen Latifah is the one whose transition Nicki most admires.

Seriously, tell me you can’t see Onika having a daytime talk show in a few decades after doing a couple of movies, TV shows and hosting gigs?

That’s so going to be her career trajectory, so it was so nice to see two women in rap with a great respect for each other give the world this moment.

Now excerpts from their chat via Necole Bitchie:

On being one of the leading forces in hip-hop:

I don’t know. I just take it one day at a time. I always want more so I’m one of those people that are just like, if you give me a compliment, in the back of my mind I’m just like, ‘Yeah right, whatever.’ I never think, ‘Yeah I’m where I wanna be,’ so it’s weird. I don’t know if one day I’m gonna sit back and be like, ‘Oh, I was doing my thing.’ Right now I just feel like there’s a lot of work that needs to be done and I want to inspire my fans to never stop. I don’t like feeling like we did it. We’re done. We made it.

On proving herself in a male-dominated industry:

On being in control of her businesses:

I have this Myx Moscato. It’s really good. I wish you guys could taste it. It’s so good. I have a clothing line with Kmart and that was really hard for me because I tussled with that decision. My inspiration was a lot of the dresses on Idol that I wore, they were super expensive and my fans were like, ‘Where’d you get that?’ But they couldn’t necessarily afford it because they’re in college or whatever. So I wanted to create dresses that I would wear. They’re free-flowing and they’re pretty and you can kind of dress it up however you want to.

On her time on American Idol:

It was scary. It was real scary. Just being a black woman, too, and being apart of Hip Hop, I kind of feel like I’m always on the bottom of the totem pole. I’m on the bottom of every totem pole I feel like, really, in terms of proving yourself. In terms of showing that you’re intelligent and you can carry on a conversation and you can speak about many different topics. So I felt like I was kind of representing for so many different people. Rap and then black women and then women in general being on Idol. I made a mental note…I just didn’t want it to come across as a caricature of Nicki Minaj. I wanted it to be the human being. The Onika Tanya Maraj that nobody ever really speaks to. And that’s what I found. I found that a lot of people come up to me and say, ‘You’re a real person. You’re kind of like a regular person with real thoughts and stuff.’ I was like, ‘Well, thank you.’  Idol was great in it gave me the opportunity to show that. That’s what I took away from it. I see these people giving their all and crying and breaking down and this is their dream. Sometimes you take for granted what you have and it was a good way to see just to be thankful from where you are.

WATCH THE INTERVIEW UP TOP!