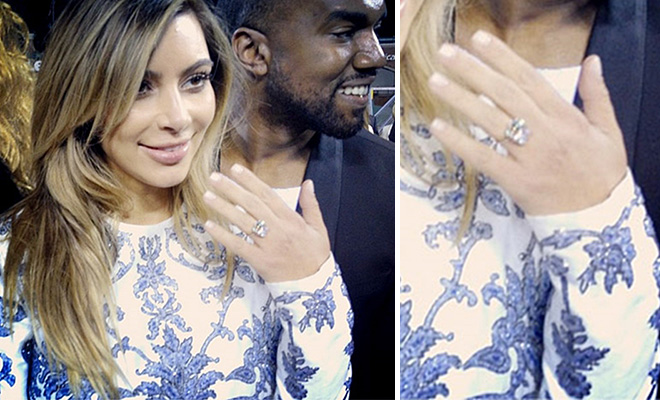 Kim Kardashian will be getting married for a third time.

Yes, despite her sex tape and two failed marriages, yet another man wants to make her his bride. Are you mad? I hope not ’cause that’s pretty pathetic. Kim wins again and you will deal. After that, a 50-piece orchestra played Lana Del Rey’s “Young and Beautiful,” followed by Keri Hilson, Ne-Yo and Kanye’s “Knock You Down.”

Not to be outdone, E! News reports that “fireworks and roman candles exploded into the night sky, setting quite the mood for one heck of a birthday present for Kim.”

The stadium, home to the San Francisco Giants, was completely empty sans Kim’s close friends and relatives. They proceeded to pour out after Kim said yes.

Before Kanye popped the question, he asked Kris Jenner for Kim’s hand in marriage. If you’re wondering, Kanye proposed with a 15-carat diamond ring by celebrity jeweler Lorraine Schwartz.

And not surprisingly, TMZ has video of the proposal right here: