GOSSIPONTHIS.COM LOL Jon Stewart Has Been Blasting the “Zebra Queef” Republicans All Week Over... 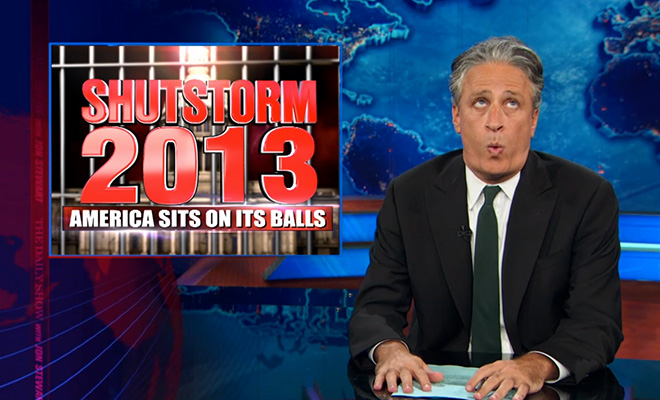 Our favorite person on TV Jon Stewart has been letting the Republicans HAVE IT all week on the “Daily Show.”

After a three-month absence, Jon Stewart returned to television earlier this month, and just in time too.

As of Tuesday, October 1st 2013 the United States government has been shutdown, for the first time in nearly 20 years, and the night before official shutdown, Stewart let loose on the GOP, mocking them over their angst over the Affordable Care Act, aka Obamacare, aka “The End of America As We Know It for Reasons No One is Able to Clearly Explain,” as he put it.

He then explained to Republican representatives how the government works, since they seem they have forgotten:

So everything appears to have been done literally by the book. This bill is now a law, vetted by the very system these Republicans claim to love — but to hear Republicans tell it, the whole thing could just be avoided if President Obama would just meet him halfway!

The bill is a fucking law! Are you familiar with how the word works? Did you see the Giants game on Sunday? Okay: they lost 31 to 7. And you know what the Giants didn’t say after that game? ‘If you don’t give us 25 more points by midnight on Monday, we are gonna shut down the NFL!’

Stewart continued his assault on the “Republican Morons” Tuesday night and even turned his irritation to the idiotic Fox News network, saying directly to them “F**K YOU!!!” in response to their nonchalant attitude towards the shutdown and how it affects people.

And on Wednesday night, just one hour before the third day of the “Shutstorm 2013,” Jon called Republicans “self-righteous Orwellian zebra queefs” and called “bullshit” on their claims that the Democrats are to blame, telling them to “stop trying to photo-op your way out of responsibility for this catastrophe.”

This guy is on a roll!