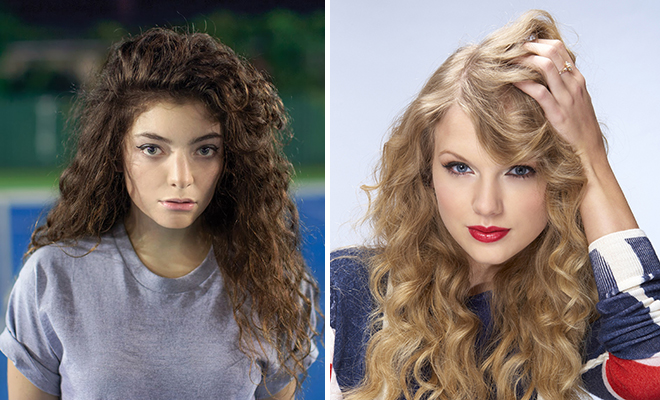 New Zealand teen sensation Lorde is starting to give teases that she is a vanilla-flavored version of Azealia Banks.

Like my beloved little zee zee, Lorde does not have a problem with publicly singling out her contemporaries. Sometimes it’s to pay a compliment, but more often than not, it’s to toss some shade in their direction.

She’s already done it with Lana Del Rey, but now more people are being alerted to comments she made about Taylor Swift. In a recent interview she said of the country singer and constant smiler, “Taylor Swift is so flawless, and so unattainable, and I don’t think it’s breeding anything good in young girls. ‘I’m never going to be like Taylor Swift, why can’t I be as pretty as Lorde?’ That’s f*cking bullsh*t.”

Keri Hilson wrote a song about this kind of problem, but based on that comment, I doubt Lorde bops-so-hard to “Pretty Girl Rock.”

To be fair, Lorde wasn’t exactly throwing shade at Taylor; more so about what she believes Taylor Swift represents. Even so, I can see why Taylor might feel a way considering while she may have benefitted from her looks, she’s never made that the focal point of who she is or what she does.

Still, Lorde has clarified by way of a question posed to her on Tumblr:

Q: Can you explain what you said about Taylor Swift because I feel like many didn’t understand?

A: sure! i think i cocked that up a bit and what i said wasn’t put in context also. what i meant was: there’s a lot of importance placed on physical perfection in this industry, and i wish my favourite stars didn’t look perfect because i think fans (me included) have these feelings of worthlessness, like they’ll never be as pretty/talented/whatever, as a result of this intense photoshop culture and the endless strive for perfection. ts was the first person i thought of, which i regret. she happens to be good looking, but i think she actually uses her other imperfections in an incredibly powerful and relatable way. taylor swift has a very unique vision, which i admire. i think somewhere along the line also there was a misquote where people got the impression i thought writing about love was shameful. i don’t! i just haven’t found a way of doing it which is powerful and innovative, which is why i don’t.

ps. i am very very new to this whole thing. i will probably never be the kind of role model for my fans that ts is for hers. i admire her very much for this reason. basically, this is an apology for not thinking too hard before i speak. peace.

Yes, clean that up, girl. Lana Del Rey is one thing, but Taylor Swift is another beast. You see what happened to Kanye after he came for her.