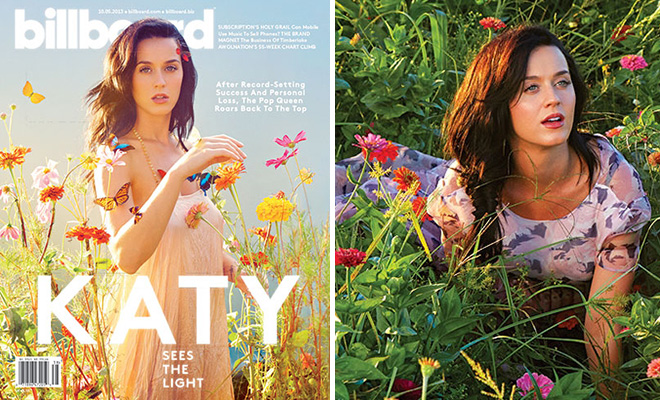 She may not get as much attention because she’s not walking around in a costume made out of deli meat or live tweeting her overdoses like her contemporaries, but Katy Perry is out here riding around and getting it — at least on the Hot 100 anyway.

In preparation for her forthcoming album ‘Prism’ Katy talked with Billboard about some of what we can expect to her on her new project. Plus, she talked about her boyfriend, her ex-husband, and the shade she received courtesy of Barbara Walters.

On the shade she received from Barbara Walters:

“I shouldn’t have done the interview: I was playing Madison Square Garden that same night, and I knew that the end of my marriage was coming. I was just exhausted and stressed. I’d prepped everyone that I was running late, but Barbara showed up at the original time anyway. When I got there, I apologized immediately, but then she said to me, ‘You know, I’ve only ever waited for one other person this long, and you know who that person was? Judy Garland. You know how she turned out, right?’ I was like, ‘Oh, snap! Yes, bitch!’ I think it’s the coolest thing that Barbara Walters shaded me. I just couldn’t tell her as we were sitting down for a mega-interview, ‘Hey, my marriage is falling apart. Give me a break.'”

On her boyfriend and musical collaborator, John Mayer:

“He literally is a genius, as is evident from his songwriting. I always tell him, ‘Darling, you know I’m going to have to give your mind to science after you’ve passed, because we’re going to have to understand how all these sparks work.’ We’ll be in bed, and he’ll be doing the crossword puzzle. Every night, he tries to finish it in under 10 minutes. When he puts his mind to something, he really gets it done very well. I always ask for his help.”

On the new track “By The Grace of God,” which addresses her divorce from Russell Brand:

“That song is evident of how tough it really was at a certain point. I asked myself, ‘Do I want to endure? Should I continue living?’ All the songs are real-life moments. I can only write autobiographically. I put all the evidence in the music. I tell my fans if they want to know the real truth about stuff, just listen to the songs.”

“I love Madonna to death, but she’s never going to give me that damn baton [Perry jokes]. I’ll probably turn into more of a Joni Mitchell. As I inch towards my 30s, I think my fourth record will be more of an acoustic guitar album. That’s where I started when I was first discovered by Glen Ballard and got my first record deal. We’ll see-I can’t get ahead of myself. I’m still doing the work: I’m a good balance of left and right brain, and to be an artist with a long career, you’ve got to have both. One thing John said to me was, ‘It’s harder maintaining success than finding it.’ I’ve got a few records under my belt, and I still feel like a brand-new artist. People still want that truth to cut through.”