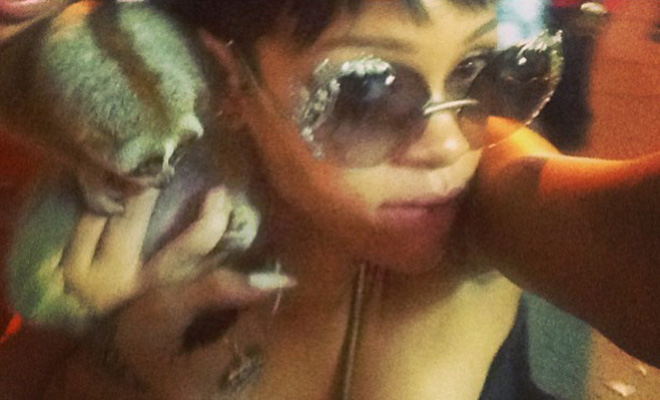 When will you children learn that you don’t have to live tweet and Instagram caption your life minute by minute?

Such is a great lesson for many, but in Rihanna‘s case, it doesn’t really apply to her. I mean, it’s not like her social media updates got her arrested, right?

On a break from her Diamonds World Tour, Rihanna visited the Thai island of Phuket and befriended area wildlife.

She ended up putting up a photo on Instagram of her snuggling up to a primate known as the slow loris and captioned: “Look who was talkin dirty to me!” She also shared the link via Twitter.

That’s how some authorities got word of it and ended up thinking, “Oh no, bitch. That’s an endangered species.”

Not long after two people were arrested for allegedly peddling protected species.

Weera Kerdsirimongkon, a Phuket district chief, told the Associated Press, “Phuket authorities were alerted to the picture (of Rihanna), and last night police arrested the two individuals who brought out the loris as a photo opportunity for tourists.”

Rihanna might want to tweet out a “poor dat” in honor of her now incarcerated petting zoo keepers.