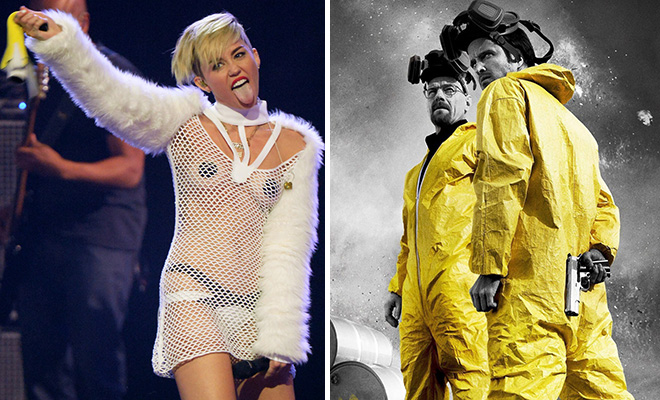 Nothing Miley Cyrus has done over the last few weeks makes any sense, but in a recent interview with RollingStone, the famed twerker said something we can’t deny is true.

The pasty-wearing star noted that censorship in America is head-scratching and sites “Breaking Bad” as the perfect example of this.

“America is just so weird in what they think is right and wrong. Like, I was watching Breaking Bad the other day, and they were cooking meth. I could literally cook meth because of that show. It’s a how-to.

“And then they bleeped out the word ‘fuck.’ And I’m like, really? They killed a guy, and disintegrated his body in acid, but you’re not allowed to say ‘fuck’? It’s like when they bleeped ‘molly’ at the VMAs. Look what I’m doing up here right now, and you’re going to bleep out ‘molly?’ Whatever.”

For those of you that don’t know, since the AMC series is on network TV, they are rarely allowed to use the F-word and when they do, it’s bleeped out.

However, the show includes nudity, sex and (of course) lots and lots of drugs. Not to mention there are countless ghastly deaths that include characters being beheaded with an ax, having their throat slit and being blown up.

There’s also the poisoning and murders of children, lifeless bodies being dissolved in acid and in one infamous scene, a severed head being placed on a moving turtle.

But apparently, one of two little F-words slipping by would be too much.