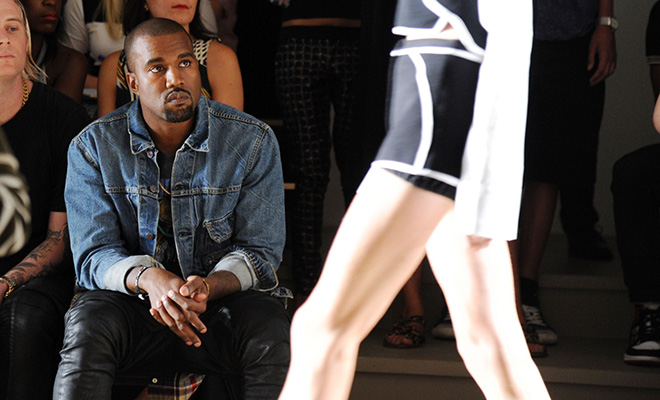 According to their sources, several designers were worried that the rapper and fashion designer would steal ideas from their presentations and apply them to his own fashion line.

First off, the column kicks off by noting that the rapper “has turned to LinkedIn to help staff his new fashion business.” No offense to those on LinkedIn, but something about that screams “that’s a read!”

In any event, they report:

“It was something that was discussed beforehand — ‘Do we let him in and risk our ideas being sold off by him?’ ” says our insider.

The help-wanteds gave little insight into what West may be trying to achieve, besides saying the project “will leverage Mr. West’s success in high fashion and music to bring accessible style to malls and other outlets across America and around the world.”

Kim Kardashian’s boyfriend debuted his first clothing line in 2011 and recently collaborated with the highly respected French fashion house A.P.C. on a menswear line. Goldin also consulted with West for his own knitwear line.

As for Fashion Week, our source speculated: “He is there because he is coming out with a new clothing line and is desperate for ideas on what’s hot.”

Not to be outdone, the paper made it clear that Kanye was less than thrilled to see them or hear their questions:

When Confidenti@l tried quizzing West at the Diesel show Tuesday, he lashed out. “Don’t ask me questions!” he shouted at us. When we repeated our soft question, asking what he was wearing, baby North West’s moody new dad made a quick getaway through a side exit while his security manhandled us.

Well, that certainly explains the shade felt throughout this report, right?

I would like to think Kanye West wouldn’t blatantly steal from anyone. It would be more like a “Blurred Lines” situation in that he’d pull “inspiration” from someone else, and in turn, create his own vision.

I suppose we’ll find out whether or not Kanye “borrowed” ideas from any of the designers who presented at New York Fashion Week when it’s ‘Ye’s turn for another show.