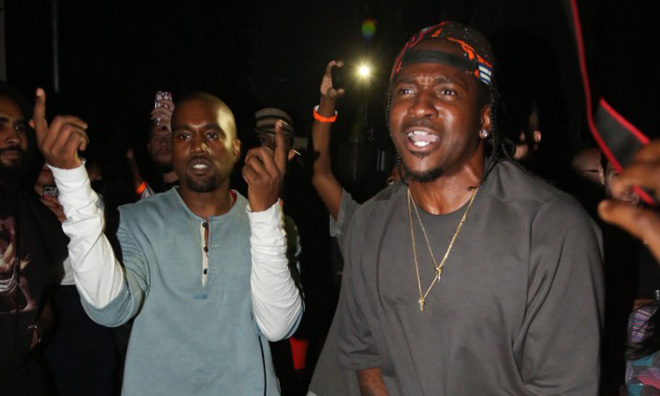 So….uhm. Yeah. Kanye West got drunk the other night.

REALLY drunk, apparently. And we all know what happens when Kanye gets drunk right?

North West’s daddy was attending a listening party for Pusha T’s new album ‘My Name is My Name’ when all of a sudden he got that urge to go on one of those epic rants of his.

While introducing his artist (Pusha T is a part of Ye’s G.O.O.D. Music label imprint), the rapper — who was drunk as a skunk (he said so himself) — grabbed the mic and addressed the crowd, ranting and raving about how evil corporations are, and how much he hates sellouts and crappy designers who put “numbers” on the back of their shirts.

Miss Info has the full video, AND the full text:

Aye yo this Yeezy right now speaking to y’all. This the heart of the muthaf**king city, act y’all ain’t have that muthaf**king Clipse album and shit. Act like y’all ain’t base y’all whole shit, whole lifestyle off this ni**a Pusha T. Everything is Pusha T. Pyrex Vision, that’s Pusha T.

Fear of God, that’s Pusha T. This ni**a the heart of the muthaf**king culture for you culture vultures. This the only ni**a spitting that wild muthaf**king hip-hop shit right now, that’s why I stand next to this ni**a.

This DONDA, this Matt Williams, this Virgil Abloh, this Ferris Bueller, this is muthaf**king Pusha T. I’m done.