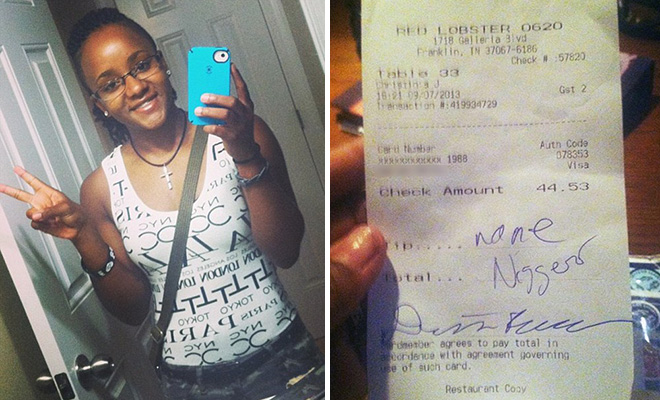 A 19-year-old Red Lobster waitress was reportedly suspended after she posted a customer’s racist receipt on her Facebook page.

Toni Christina Jenkins said she was working her shift as a server at a Nashville, TN Red Lobster when she encountered two customers — a couple (a man and woman in their 20’s) — who were “extremely rude” to her. She said the customers had ordered about $45 worth of food, but didn’t leave a tip.

In the Tip section of the receipt, instead of leaving a gratuity, one of the customers wrote “None” and the racial slur “Nigger” was written directly below that in the Total section. Jenkins, a nursing school student  who has been working at the famous restaurant chain for nearly a year now, snapped a picture of the message and shared it on Facebook, writing, “This is what I got as a tip last night…so happy to live in the proud southern states. God Bless America, land of the free and home of the low class racists of Tennessee.”

Her father, Toney Bernard Jenkins, also posted the image on his Facebook page too, saying that he hopes it will bring “awareness to the simple fact that we still have much ignorance to overcome, so much more love to give and so much hope to inspire change.”

After the story went viral, Red Lobster found out and Jenkins was placed on “suspension with pay,” while management determines whether or not she violated company policy.

She has since deleted the post, but not before she faced some ridicule over its authenticity, with some people accusing her for simply being mad that she didn’t get a tip.

While most of her friends/family were supportive of the posting, before it was deleted, one man — who made it a point to note that he was black — spoke on the the doubts he particularly had about it.

“As a black man, I simply don’t believe this is real,” he wrote. “The word ‘none’ has totally different handwriting from the word ‘Ni**er.’ There’s lots of stories lately of people making false accusations of racism or discrimination for attention. I think you should just admit you did this yourself because you were mad he didn’t tip you… This poor man is innocent and I think you are racist against white people.”

Another observant poster noted that the two words appeared to be in different handwriting styles, with the “N” capitalized on one line, but not the other. The letter “e” also appeared to look different in each of the words.

But Jenkins told the Daily Mail that she would never fake something like this, or accuse someone of racism just because they didn’t leave her a tip. “I don’t get tips all the time. I really don’t care cause God is my provider I don’t worry about tips,” she said.

She added, “They were extremely rude, but I introduced myself to them and they didn’t respond. When I came to take their order they simply told me they wanted their food and to put everything in a to-go box.”

“I offered them dessert but they told me abruptly that they just wanted the check.When I went back to the table they had gone and left the receipt and had written the comments,” she said. Jenkins said after she picked up the receipt and showed it to her manager, she was told she had done nothing wrong and didn’t deserve such abuse, yet she was still suspended because she posted it on the Internet.

Though folks have accused her of faking this whole thing for attention, Jenkins still stands by her story and is encouraging all of her friends and family to continue sharing the post on Facebook.

A spokesman for Red Lobster told The Huffington Post that the company was “extremely disturbed” by the situation and was currently investigating to find out exactly what happened.

“We take this extremely seriously,” wrote company spokesman Mike Berstein. “This kind of language is completely disgusting and has no place in our restaurant or anywhere else, and we are committed to getting to the bottom of what happened as quickly as possible.”