GOSSIPONTHIS.COM Celebs Do Robin Thicke and Paula Patton Have An Open Marriage? 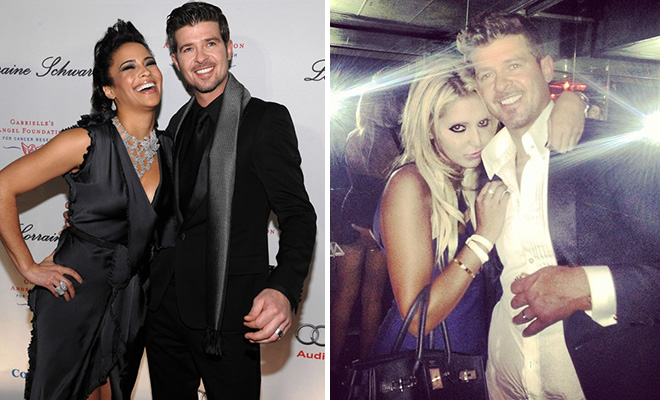 After assisting Miley Cyrus in making an ass out of herself at the 2013 VMAs, Robin Thicke was caught placing his hand on the ass of a woman who was not his wife.

Now the woman in question is speaking out to gossip magazines. Yes, Lana Scolaro is recalling the night with Life & Style and accusing Robin Thicke and Paula Patton of having an open marriage.

As she tells it, Paula was right there when Robin was feeling her up — indicating she had no problem with what was transpiring before her eyes.

Uh, have y’all seen how Paula Patton looks at awards shows lately? She might be in a room, but there’s always a definite chance she may not be exactly present in it. Welcome to mainstream fame, Robin Thicke. This will always be with you now.

In an exclusive interview in the new issue of Life & Style, Lana reveals that not only did she hook up with Robin that night, but she did so while Paula was just a few feet away.

“I don’t think he cared what she thought,” Lana tells Life & Style. “I was with him the whole night!”

The two had met the week before at a friend’s party, and she says he immediately approached her at the 1Oak VMAs shindig with the pick-up line, “I just love the fact that you’re so young.”

“His hands were everywhere,” says Lana.

Lana says that initially she pushed him away because he’s a married man, but that Robin told her Paula was “chill” and even encouraged Lana to talk to her.

And his bad behavior only continued as Robin led Lana into his car to leave the nightclub and, oddly, his wife joined them. They all headed to a bash at a suite in the Greenwich Hotel, where Robin and Lana got closer on the couch.

“I went to the bathroom, and when I came out he was standing there,” she tells Life & Style. “He turned off the lights so no one could see us, and he started making out with me. He was grabbing me. He was like, ‘I want to get you into bed!’”