GOSSIPONTHIS.COM Politics What’s Up With Syria? A Guide to the Conflict on the Other... 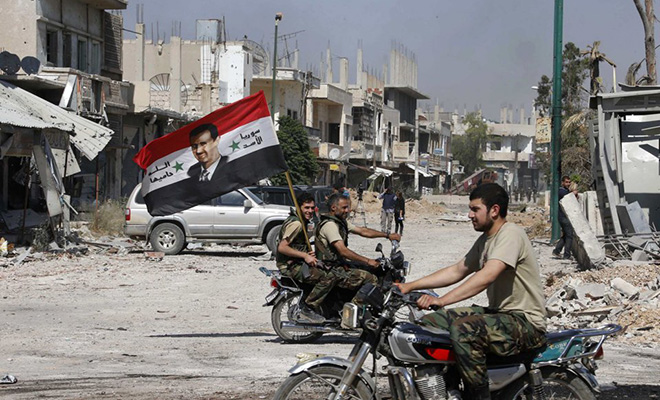 If all you’ve been able to think about is Miley Cyrus rubbing a foam finger against her privates, you may be suffering from a disorder known as Out of Touch with Stuff that Matters or OOTWSTM disease.

Luckily for you, there’s a cure. You see, there’s a war going on in Syria and it effing sucks. Below you’ll find a guide to the conflict that will make you forget all about Hanna Montana twerking in a pair of granny panties. Not that there’s anything wrong with that, but there are far more important matters in the world to worry about. Let’s start with President Bashar al-Assad. Assad is the son of Hafez al-Assad, who served as Syria’s president from 1970 to 2000. Yup, he ruled the country for a hella long time! Hafez’s eldest son Bassel was tapped to succeed him, Bashar (one of his younger sons) had little interest in political affairs. That all changed in 1994 when Bassel was killed in a car crash.

At the time, Bashar was an eye doctor living a quiet life in London. He was subsequently ushered in to rule the country after his father’s passing in 2000 and many thought, “Hey, this guy’s been living in the West and has worked a normal job, he’ll bring a new found prospective to Middle Eastern politics.” To say they were dead f**king wrong is an understatement, as would saying this dude is cray cray. The sh*t hit the fan in April 2011, when the people of Syria began a peaceful protest against the country’s firm dictatorship. That didn’t fly with President Assad and he made sure those who were part of the uprising knew it.

The president’s team began kidnapping, raping, and murdering activists. Other victims where children and/or family members of protestors. Assad’s officers littered roads with severed limbs and lifeless bodies, and demonstrators were constantly shot at.

It didn’t take long for the United Nations to determine that Assad’s regime committed “crimes against humanity.”

Remarkably, many of the civilians who now lived under constant threat weren’t going to go down without a fight and began retaliating. An inevitable civil war had begun between those that aimed to retain Syrian rule as it exists now and those that believe immense change is in order.

The Syrian army was unleashed in an attempt to shut the whole mess down but it didn’t work, as the fighting escalated even further. The army went as far as to bomb entire neighborhoods as a means of scaring the crap out of the rebels but the group was steadily expanding and now included members from other countries who strongly believed in Syrian reform.

Here’s where the biggest Holy S, OMFG moment comes in. Apparently, Assad used chemical weapons against civilians at this point. It’s estimated that Assad has killed roughly 100,000 people in total and that 1,000 of these victims are believed to have been killed by poisonous chemicals. Surely You Can’t Be Serious

You may think that at some point Assad would have cooled it on the slaughtering of his own people, but he doesn’t have a f**k to give. Reports dated as early as last week indicate that Assad’s people were using chemical weapons on civilians.

If you’d like an accurate measure of how long this man’s been riding the crazy train, watch his 2011 interview with Barbara Walters, in which she confronts him with evidence that he’s killed thousands of his own people and he’s all like, “I don’t know what you’re talking about. That never happened.” Yikes!

When she brought up the slaughtering of civilians, Assad denied ordering the deaths of the protestors and in a jaw-dropping moment, he pretended to be clueless and asked “What happened?”

At many points in the interview, he actually laughed off Walters’ inquiries. He also refused to acknowledge that many people and the leaders of his neighboring countries hate him. He repeatedly claimed that he had to wait until the 2014 election to determine that the majority of Syrians oppose him. Delusional much?

So where does the United States and President Obama fit into this hot mess of doom and horrific destruction?

Well, initially Obama had hoped to enact a peace deal between both sides of the conflict in Syria. But one glance at this photo of Syrian children who were slaughtered at the hands of the government will tell you that’s not possible.

Assad used chemical weapons, which is a BIG freakin’ deal. There’s going to be some blow-back from that. We can’t be allowing sh*t like that to go down.

It’s not like we can just assume that this was the first and last time they’ll be using deadly chemicals. This is pretty much guaranteed to come up again in the future.

And here’s where much of the controversy regarding U.S. involvement comes in. Who makes the rules when it comes to war? Who has the authority to step in, and say “tsk tsk, you put those chemicals down now.”

On the other hand, if we say, “You’re using chemical weapons, well isn’t that special” and look the other way, we could be opening the door for a sh*t storm to come right in.

And oh yeah, there was this thing called the Geneva Convention in 1925 where the world got together and decided to ixnay on the use of chemical weapons because they kill a f**k load of people on both sides (including many civilians) and don’t actually give one side an advantage over another.

Someone’s got to call Assad out on his sh*t and Obama seems to want to do that by firing a missile into the country. The U.S. asked the U.K. if they’d like to get involved and they were liked “f**k no.”

Sounds like they’re still bitter about the last time they got entangled in one of our missions in the Middle East. We also tried to get France and Germany to have our back but that’s totally not happening. The Proof is in the Casualties…Or is It?

Now it’s important to note that United Nations Security Council is still investigating whether or not Sarin nerve gas or other toxic chemicals were used.

Chemical Weapons experts are currently in Syria trying to determine what went down. So it’s easy to understand why we’re having trouble rallying up allies. That and, who the hell wants to go to war?

As of Thursday, the U.S. navy moved a fifth destroyer into the eastern Mediterranean Sea. According to the New York Times, these things can hold dozens of Tomahawk cruise missiles. So at this point, you’ve got to be thinking, “Won’t cruise missiles kill loads of people?” or “How can we tell Assad, ‘Don’t kill your own people with chemicals or we’ll kill them with missiles?'”

These are valid points that make this whole thing the giant cluster f**k that it is. Furthermore, there’s no guarantee that this all won’t lead to a (as Lewis Black would put it) “A nuclear f**k Holocaust.”

It remains to be seen how exactly the U.S. will act but whatever happens, it’s clear that Syria will be embroiled in conflict for years to come.