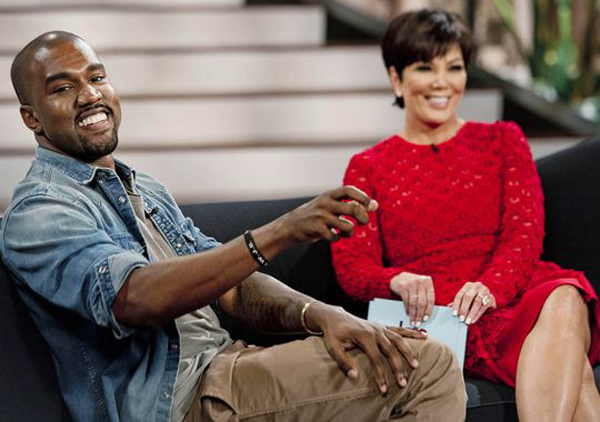 In what will live on in infamy as one of the strangest interviews ever, it appears that Kanye West was initially less than thrilled with the idea of talking to Kris Jenner on national television. Who can blame him when it seems like it might be awkward enough doing that for the few seconds a live camera isn’t around her? Just kidding, Kris. Adopt me. Please.

Moving on, it should surprise no one that Kim Kardashian was the one who convinced Kanye to sit down with Kris.

Say what you will about those Kardashians, but they get to the money together. Kanye is getting with the program. Don’t you fret for him either. Remember: He chose this life. In fact, he sought the hell out of it.

Life & Style can exclusively reveal that it was Kim Kardashian who asked him to do it.

“Kris had a mini-meltdown to the whole family about her show and how the ratings weren’t great and how they weren’t supporting her enough with the show,” a friend tells Life & Style. “So basically Kris said, ‘Kim, you have to come on the show for the finale.’ But Kim really doesn’t feel ready to do that, so she begged Kanye to do it for her.”

And there’s a reason why his interview, which is set to air today, was pre-recorded.

“He reluctantly agreed as long as there was a list of things they could and couldn’t talk about and that it was filmed in advance so that he could see the edited segment.”

That said, maybe that annoying as all hell accent he spoke in was a form of protest. You know, the kind of code switching select blacks do when they’re talking to someone at work or a person in charge of hiring people for work. Or maybe he felt compelled to speak that way because he covets white approval. Who can tell with this guy anymore?