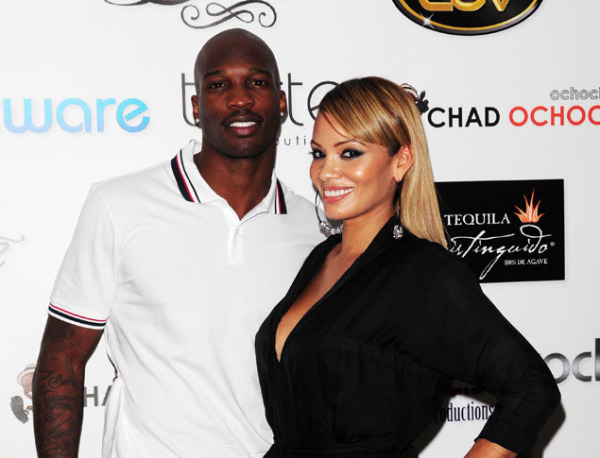 Chad Johnson doesn’t know when to let go, and evidently, wants to let it out (in his own way) that there’s “more to the story” of him head butting his then-wife, Evelyn Lozada, during an argument.

In an interview with the Broward Palm Beach New Times, the ex-NFL player and former reality star insinuates that he let his ex-wife Evelyn Lozada off the hook when it comes to her role in their fight that resulted in her needing stitches in her forehead, and of course, the end of their short-lived marriage.

“I never talk about that, you know that? For a reason. Let her tell her side. And my job is to cover the story, no matter what. And that’s what I’ve done, and it’s going to stay that way.”

“I’m supposed to. She’s the wife. That’s my job. To cover the story. That’s the way I was taught. That’s the way I was raised. If I’m your dad and I know you did something wrong, I don’t have a choice but to cover the story for you, whether you’re right or wrong. So for me, whether right or wrong or indifferent, if that’s who I’ve committed to even though I messed up, I’m covering the story for her no matter what. No matter what. Whether it’s my fault or her fault. Whether she antagonized me. Whether she pushed my buttons. You know what? You’re right. Period.”

Of course, this is music to the ears of people who want to partake in victim-blaming and want to make it seem as though it’s Evelyn’s fault that her forehead got attacked.

Listen, no matter what she said or did, it doesn’t excuse Chad Johnson doing that to her. Look at his language. “Whether she antagonized me. Whether she pushed my buttons.” Spoken like a true…well, the judge already rendered judgment about the incident.

He can do all of the interviews he wants, but that won’t change the end result. If anything, him still volunteering this information and fueling the gossip mill for attention proves why teams remain reluctant to deal with him.