Miley Cyrus has intentionally acted a damn fool in public to shake the stigma of being a Disney child star.

She’s referenced the drug known as “Molly” in her latest music video. Yes, for the track produced by Mike Will Made It. And yet, apparently it’s our fault that we perceive her as someone trying to serve “ratchet white girl” realness.

In her Notion magazine cover story, the whiny and increasingly irritating singer said:

“People have this misconception of me that I’m just one of these kids on TV and that now I go off and party and I’m just this ratchet white girl, and I’m not. I work really really hard, I’m just in a different environment.”

But she didn’t, going on to say:

“I was thinking about dropping the Cyrus and just being Miley, but there’s something powerful about the fact that my name now is like a household name. I’m young and living and in LA which is everyone’s dream, you know. I’m living it to the fullest. Rather than taking a blessing and making it a curse, it’s just like this is what this name is now. But I think my name means something—it represents something more than just what the media tries to make of it.”

I’m tired of bratty people like her do everything in their power to shove an image down everyone’s throats by way of the very media she now wants to whine about.

You sought this attention, Miley. No one forced you to do any of the aforementioned. That was you doing what you felt was necessary to shake your clean image of yore. Our thoughts of you come from you directly…and it’s too late to turn back now. 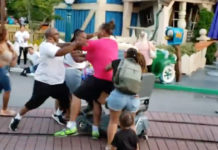