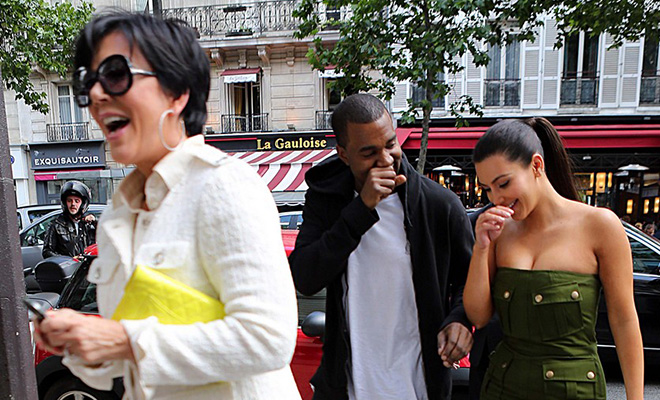 Since that odd scene on Keeping Up with the Kardashian where Kanye West stepped into Kim Kardashian‘s closet and decided to revamp her image, fans of the reality star’s original style have blamed Yeezus for having Kim Kardashian styled like a bad built fool.

However, in his new interview with W magazine, Kanye maintains that his hand in image overhaul isn’t as much as presumed. Now, I don’t really believe that, but you know, let’s just play along for a second.

West tells me he hasn’t been masterminding Kardashian’s makeover to the degree that everyone assumes. “Nobody can tell my girl what to do,” he says. “She just needed to be given some platforms of information to work from.” Since virtually everything Kardashian wears is instantly broadcast around the globe, West adds, “one beautiful thing is that as she discovers it, the world discovers it.” This includes Kardashian’s inevitable stumbles. “For her to take that risk in front of the world, it just shows you how much she loves me. And how much she actually loves the opportunity to learn. You got, like, a million companies saying, ‘This is impacting your brand! This is impacting your fans! And blah blah blah.’ But she still sees this light of beauty.”

And (random), here’s how it went when Kris Jenner by Kanye’s apartment while he was recording of Yeezus:

Next, Kim’s mother, Kris Jenner, drops by and looks around the apartment, which she’s seeing for the first time. “This is amazing!” she says as West shows her some of his favorite objects, including a new set of ceramic cups by Frances Palmer. Jenner’s rapport with West evinces equal parts jokey affection and in-law awkwardness. He plays her some of his unfinished songs, including “Awesome,” which is clearly about Kim. When she exclaims, “Great job!” West doesn’t find it as flattering as Jenner evidently intended. He raises his eyebrows. “Great job?” he says and sets off on a comic riff that cracks up everyone in the room. Toasting with his champagne glass, he says, “Great job, Baccarat, for making a glass that can hold liquid!” He looks down at his waist. “Great job, belt loops, for keeping my pants up!” Jenner laughs off the mockery but soon is ready to leave. Hugging West goodbye, she tells him, “I love you. You know where to find us, at the George V. Call us tomorrow, if you want.” It seems apparent to everyone, including Jenner, that West will not call.