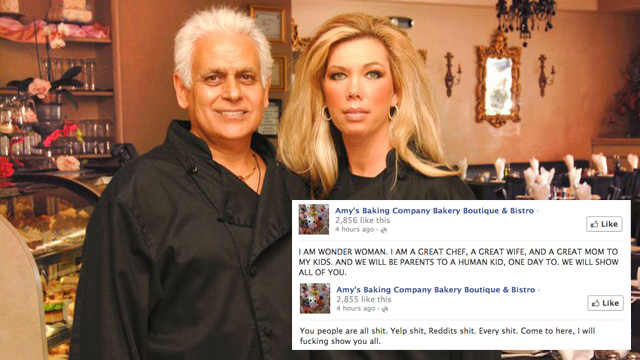 In what is being considered the “most epic brand meltdown on Facebook … EVER,” a pair of restaurateurs who appeared on chef Gordon Ramsay‘s Kitchen Nightmares TV show (and made themselves look like COMPLETE ASSES by the way) went off — and when we say, off, we mean ALL THE WAY OFF — on pretty much the whole Internet, because why the hell not?

On last Friday night’s episode of Kitchen Nightmares, Amy and Samy Bouzaglo — the owners of the Scottsdale restaurant Amy’s Baking Company Bakery Boutique & Bistro — made chef Ramsay do something he says he’s never done in the 6+ years he’s been going the show. HE QUIT!

But not because he didn’t like the husband-and-wife duo, and not even because their restaurant and its food sucks. (It really does, apparently)

Ramsey proudly walked out on them because the Bouzaglo’s (ESPECIALLY Amy) are so delusional about their sucky food and the horrible way they run their business (which includes going through 100 staff members a year, taking hours to make one pizza, firing a server on camera for daring to ask “are you sure?” about an order, etc.) that they outright refused to accept his constructive criticism.

For the uninitiated, Kitchen Nightmares is Fox show in which the famous British chef Gordon Ramsay (you might remember him from Hell’s Kitchen) goes into fledgling restaurants in a last-ditch effort to help them get their isht together. In this case, the Bouzaglo’s proved that they are fully incapable of getting their isht together.

When chef Ramsay went to Amy’s Baking Company to see how they run their restaurant, he found out why they’re failing. THEIR FOOD/SERVICE SUCKS! Not only did it take almost forever for him to receive his meal, but he literally sent every single thing back because it was either undercooked, didn’t taste good, looked sloppy, or all three.

For what it’s worth, chef Ramsay did say he liked the desserts, but since desserts aren’t the only thing on the menu, that still means the restaurants as a whole sucks. And those poor Bouzaglo’s (once again, ESPECIALLY Amy) couldn’t take hearing that from the most critical, unrelenting chef in all the land.

After the show aired, the official Facebook page for Amy’s Baking Company lit up with disparaging comments about the restaurant and its owners, and of course, the Bouzaglos — being the charming, savvy business owners that they are — TOTALLY FLIPPED OUT over them, as well as the one-star rankings they received on Yelp and this thread on Reddit.

Among their barrage of angry comments on Facebook included them calling everyone “punks” and “little shits,” threatening legal action against the Redditors and Yelpers, and Amy calling herself “Wonder Woman.”

Take a look at their totally irate responses below: Amy and Samy Bouzaglo have since deleted the postings and updated their Facebook with this:

Obviously our Facebook, YELP, Twitter and Website have been hacked. We are working with the local authorities as well as the FBI computer crimes unit to ensure this does not happen again. We did not post those horrible things. Thank You Amy & Samy 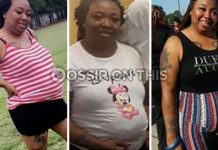