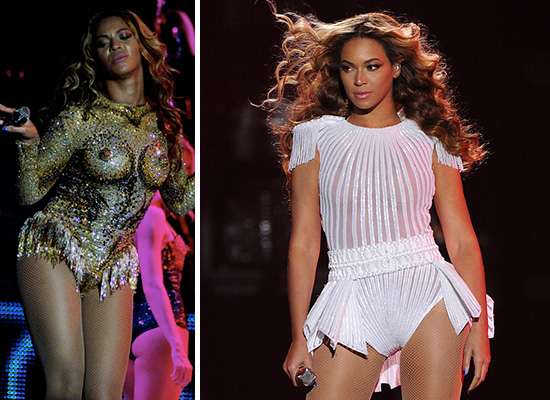 Beyoncé kicked off her “Mrs. Carter Show” world tour in Belgrade, Serbia Monday night (Apr 15) and from the looks of it, Bey most certainly did not disappoint. Playing to a sold-out crowd of 20,ooo, her first show featured pyrotechnics, costume changes and an energetic 20-song set featuring all of her hits.

Although Beyoncé debuted no new music, one thing that stood out about the show was her costume changes. During the two-hour concert, Beyoncé made eight costume changes and one in particular had everyone talking. The aforementioned costume was a gold, sequined leotard that accentuated a woman’s form fully equipped with nipples. The look was supposed to resemble a woman in the nude, andnaturally, it has sparked some criticism.

In addition to Beyoncé’s nude, embellished leotard, the superstar diva also sported a leather coat and hat with no pants, a sexy, red leotard dress, a white, embellished leotard, and a black sequined cat suit, among other costumes. All the costumes were made by Emilio Pucci’s creative director Peter Dundas and her shoes were made by Stuart Weitzman, her go-to shoe creator for her tours.

The only new music we have heard from Beyoncé has been a sample of “Grown Woman” and “Bow Down/I Been On,” which doesn’t seem to be a full single. Beyoncé performed music from her four previous albums and one Destiny’s Child song.

HERE ARE THE PHOTOS:

AND NOW FOR THE VIDEOS:

The Mrs. Carter world tour will travel overseas before it touches down in the U.S. in June.