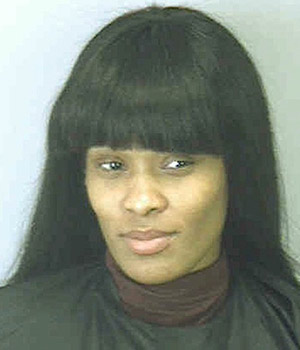 When Beyonce hooked up with Jay-Z, he considered it an upgrade. Walter Jackson used to call former Miss USA and “Real Housewives of Atlanta“ star Kenya Moore his one and only. But now, he’s swimming in the waters of Tamecia Pace.

In Episode 18, Walter Jackson strolled up to Kandi’s housewarming party with a scruffy, nasty looking scallywag of a woman named Tamecia.

Her attitude during the whole party was stank, like she ate a big ol’ bowl of corn flakes with sour milk. It probably didn’t help matters that Cynthia’s husband Peter couldn’t even be bothered to remember her name. But now Straight from the A has pulled the files on Tamecia’s past and it’s about as busted her taste in hair systems.

The 29-year-old was apparently arrested last year in the summer for multiple traffic violations. SFTA got the prize-winning mugshot.

Kenya might be all kinds of crazy, but jumping from her to this hoodrat is like ditching a solid Benz for a Honda Civic.