“Rainbow Aurora Rotella,” to be exact. But why?

“I wanted to give my daughter a unique name,” Madison told E! News. “Growing up, there was a girl in my school named Rainbow and I was so envious of that name. I thought it was so pretty and unique!”

Holly Madison and her boyfriend Pasquale Rotella welcomed Rainbow on March 5th and she weighed in at 7 pounds, 2 ounces.

“Pasquale and I welcomed our first child, a baby girl!” the E! reality star told In Touch Weekly at the time. “We haven’t yet decided on a name for her but we couldn’t be any more overjoyed than at this moment.”

“I’ve never been more in love than I am today as, after months of waiting, I finally was able to hold my daughter for the first time,” Rotella also told the magazine. “I’m truly the luckiest man in the world.” 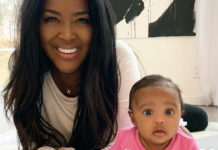