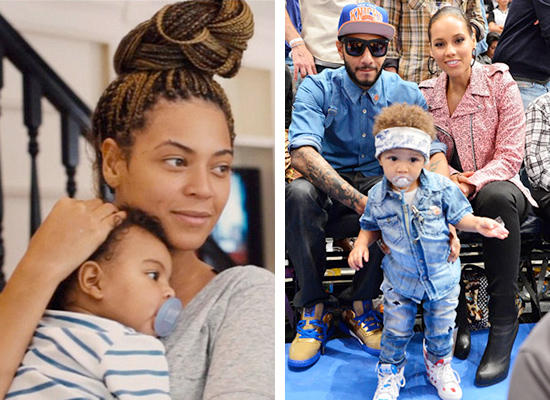 Looks like Blue Ivy Carter already has a secret admirer! Alicia Keys was on the “Wendy Williams Show” Tuesday (Feb 19) and she talked about how her 2-year-old son Egypt stole a kiss from Jay-Z and Beyonce‘s 13-month-old daughter when they were playing together one day.

“We’ll get together and meet there [at the Knowles-Carter house] and like hang out and the kids will hang out and I think Egypt kissed Blue … and I don’t think Jay liked it very much,” Keys joked.

So what did Jay have to say about the innocent kiss?

“He called my husband [Swizz Beatz] and he was like, ‘Umm … watch your son,'” Keys added.

But Egypt isn’t the only secret admirer Blue Ivy has, apparently. Millions fawned over little Blue when Beyonce finally showed the first pictures of Blue since she was just a month old in her HBO documentary “Life is but a Dream.”

Jay-Z will surely have to deal with many more of Blue Ivy’s admirers over the years, and it seems that Egypt is quite the ladies’ man too. He looks like he was trying to put the moves on Beyonce in this photo of him at Sunday’s NBA All-Star game in Houston: