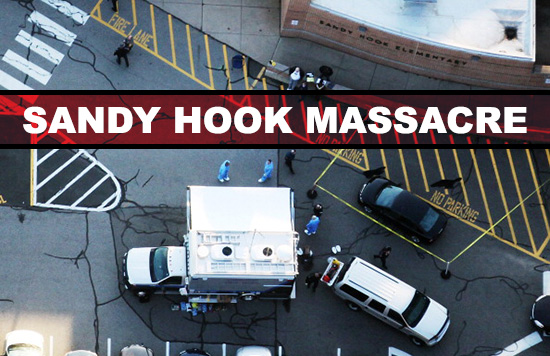 Sandy Hook Elementary school — located in the small town of Newtown, Connecticut — was the scene of a mass shooting early Friday morning (Dec 14) that resulted in the tragic loss of at least 28 lives, including 20 children, the shooter himself and another person later found dead at a second scene.

Police have yet to officially identify the gunman, but multiple outlets are reporting that the shooter was 20-year-old Adam Lanza. He was reportedly carrying four weapons, and wearing black clothing and a bullet proof vest as he opened fire at the school.

According to reports, Lanza, the son of a kindergarten teacher at the school, showed up at about 9:40 a.m. just about 30 minutes after the day had begun. He had driven to the school in his mother’s car.

Someone who claimed to witness part of the shooting witness told CNN that gunshots were heard in the hallway during an early morning meeting, and after the shots were fired, three people — the school’s principal, vice principal and psychologist — ran into the hallway, but only the vice principal crawled back with a gunshot wound to the leg.

The principal and psychologist had been shot and killed. The gunman then walked to another part of the building, where his mother’s classroom was, and opened fire on a room full of innocent children. One parent told CNN that his 6-year-old son was in class when the gunman burst into the room and shot the teacher and several other students without uttering a single word.

“That’s when my son grabbed a bunch of his friends and ran out the door,” Robert Licata said. “He was very brave. He waited for his friends.”

There were about 600 students in the building at the time of the shooting, and the Newtown Patch spoke with another school parent who praised her 8-year-old daughter’s teacher for protecting her students.

“My daughter’s teacher is my hero,” Brenda Lebinski said. “She locked all the kids in a closet and that saved their lives.” Other students were led to safety single file from the building to a nearby fire station, where parents arrived — after being alerted through text messages and e-mails from the school district — hoping to find their children safe.

The shooter was later found in the building lying in a pool of blood, dead from a self-inflicted gunshot wound.

Police officials said three guns were found at the scene — two pistols (a Glock and a Sig Sauer) and a .223-caliber Bushmaster assault rifle. The pistols were found inside the building, while the rifle was recovered from the back of his car.

Officials also said the shooter’s girlfriend and another friend were missing in New Jersey, and a senior law enforcement official says a brother of the shooter was found dead in a home police searched in Hoboken, New Jersey, which brought the total death count up to 28.

It was initially reported that the shooter was a 24-year-old man named Ryan Lanza, but the latest official reports confirmed that the shooting suspect is 20-year-old Adam Lanza, Ryan’s younger brother.

After the shooting, Ryan was questioned by police in New Jersey, and apparently his ID was found on Adam’s body, which led officers to originally believe that he was the shooter.

Naturally, the shooting at Sandy Hook Elementary is being compared to previous school shootings in the country — Columbine and Virginia Tech, in particular — that claimed the lives of innocent people, and some are considering it to be the worst school shooting in United States history. Columbine’s death toll was 15, while 32 died in the Virginia Tech massacre. President Obama was understandably emotional as he made an official statement on the tragedy this afternoon.

“We’ve endured too many of these tragedies in the past few years,” he said. “Each time I learn the news I react not as a president but as anybody else would as a parent. That was especially true today. I know there’s not a parent in America that doesn’t feel the same overwhelming grief that I do.”

He continued, “This evening Michelle and I will do what every parent in America will do – hug our children a little tighter and tell them that we love them.

“There are families in Connecticut that cannot do that tonight and they need all of us tonight. May God bless the memory of the victims and in the words of scripture heal the broken hearted and bind up their wounds.”