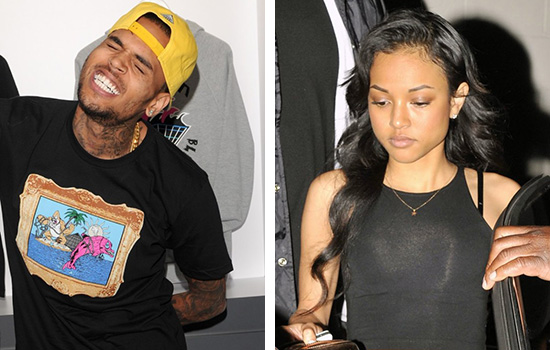 Chris Brown successfully avoided making contact his ex girlfriend Karrueche Tran at a nightclub in Los Angeles last night. And we don’t know whether or not it was on purpose, but the timing sure was perfect.

While Rihanna was on the other side of the country in New York City strutting her stuff down the runway for Victoria’s Secret annual fashion show Wednesday night (Nov 7), Karrueche used that as an opportunity to get close to her boo thang Chris Brown and win him back. Or at least she tried to.

According to the rumor mill, Karrueche — after attending a friend’s birthday party at L.A.’s Seven Grand nightclub — tried to “run into” Chris Brown at Tru Nightclub, where the singer was hosting a party … but unfortunately for her, Chris had already left the building by the time she arrived. But Karrueche didn’t let that stop her from sticking around for a moment and having a good time with her friends. Besides, she did get to see Chris earlier in the day at a L.A. clothing store at an event launching his new clothing line.

“He was nice to her and gave her a hug, but he was there handling his business,” an eyewitness told Hollywood Life. “Who knows if Karrueche was invited, but she was in the building supporting Chris. Everything was PG.”

Because 60 percent of the time, keeping everything “PG” works every time.