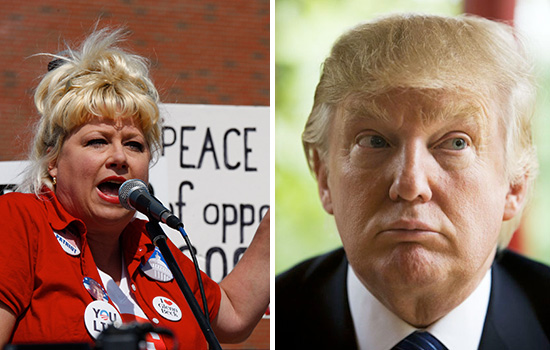 While most of the Twittersphere (and the world for that matter) was celebrating President Obama‘s second election victory last night, there were some sore losers out there who expressed their anger over having to call Barack Obama “President” for another four years.

Among the sea of losers were Donald Trump (the “biggest loser” of all) and former SNL actress Victoria Jackson, who both went on separate, but equally crazy, tirades about starting revolutions and “crying for a dying America.”

Before the election was even called, Trump — one of Mitt Romney‘s biggest supporters — began tweeting that the entire process was a “total sham and a travesty,” and after multiple news outlets projected that Obama had won the election, Trump posted a series of angry tweets calling for a “revolution” among our “divided” nation: Our country is now in serious and unprecedentedtrouble…like never before.

The electoral college is a disaster for a democracy. — Donald J. Trump (@realDonaldTrump) November 7, 2012

House of Representatives shouldn’t give anything to Obama unless he terminates Obamacare. — Donald J. Trump (@realDonaldTrump) November 7, 2012

Obviously, and understandably, perturbed by Donald Trump’s disjointed Twitter rant … NBC News anchor Brian Williams went off on the billionaire business mogul live on the air saying, “Donald Trump has driven well past the last exit to relevance and veered into something closer to irresponsible.”

Trump later deleted some of his tweets, including the ones calling for revolution and and incorrectly saying that Obama had lost the popular vote. In a new tweet Wednesday, he said the election was “the Republicans to win” and Mitt Romney lost because he failed to connect with voters.

Giving Donald Trump some serious competition in the race of sore losers, that Victoria Jackson lady — who no one under the age of 35 even knew existed before last night — tweeted that she couldn’t stop crying, and expressed her disappointment in Christians “for not showing up.”

The Democrat Party voted God out and replaced Him with Romans 1.In the Good vs. Evil battle…today…Evil won. — Victoria Jackson (@vicjackshow) November 7, 2012

Thanks a lot Christians, for not showing up.You disgust me. Mitt Romney may have lost the election … but Donald Trump and Victoria Jackson are losing at life right now, which is way worse. Waaaaay worse!