According to multiple reports, actress Sofia Vergara is engaged to her on-and-off-again boyfriend Nick Loeb after Loeb proposed to her while they were on vacation in Mexico for Vergara’s 40th birthday. The “Modern Family” star and her 36-year-old entrepreneur beau have been dating on-and-off since 2010, and a new photo of Vergara (above) appears to show her with a huge rock on her left hand, which many are assuming to be an engagement ring.

Loeb reportedly proposed to Vergara on Monday (Jul 9) while the pair were visiting the archaeological ruins of Chichen Itza, which was followed by a birthday/engagement party attended by Sofia’s cast mates Jesse Tyler Ferguson, Julie Bowen and Sarah Hyland, who all flew to Mexico for the occasion.

A source told E! News Sofia was “bouncing around and showing everyone the ring.”

However … sources close to the actress say that she and her boyfriend aren’t necessarily engaged just yet. “As of today, Sofia is not engaged,” an anonymous Mexico-based rep told Peopleenespanol.com.

Neither Sofia nor Nick have yet to confirm/deny the engagement speculation. 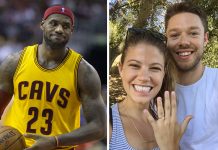 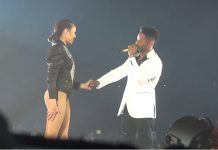