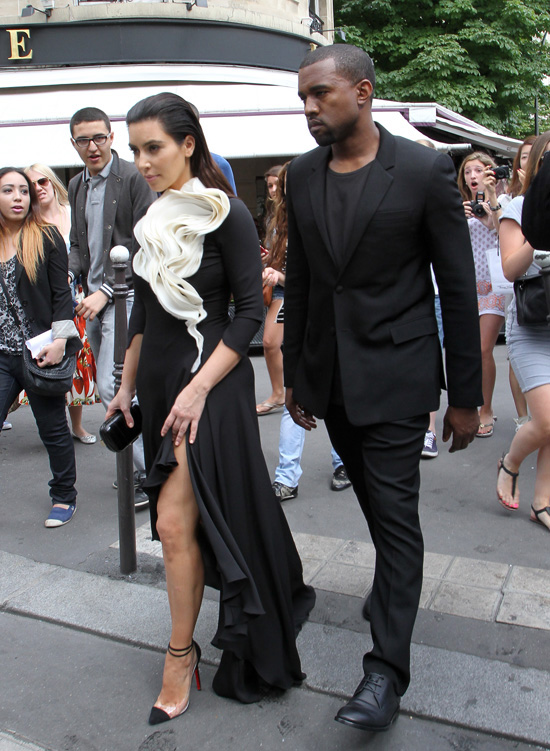 Right after Sunday night’s BET Awards, Kanye West and his new girlfriend Kim Kardashian jetted to the City of Lights to take part in the festivities for Paris Fashion Week 2012.

“Hopped off the plane in Paris, now in a Stephane Rolland fitting! Can’t wait for his couture show tomorrow!” Kim tweeted Monday (Jul 2). On Tuesday (Jul 3), Kimye — dressed in all black, with the exception of Kim’s big poofy corsage thingy — attended the Stephane Rolland fashion show, which was held up for nearly an hour because the organizers were waiting for the couple to arrive.

In fact, according to Fashionista.com, Kimye got there so late, that Rolland’s people were forced to start the show without them. A tweet from Women’s Wear Daily said that the couple almost missed the show, and took their seats shortly before the finale.

After the show Kim tweeted, “Just left the Stephane Rolland Couture show! His clothes are so next level beautiful!!!” Later that very same day, Kim and Kanye were seen leaving an after party hosted by Louis Vuitton in celebration of the opening of their new boutique.

While Kanye kept on the all-black suit he wore to the Stephane Rolland show, Kim opted to change into a new outfit — a zippered crop top she paired with paperbag trousers and her Christian Louboutin heels. The next day, which was the Fourth of July, the stylish couple spent their holiday sitting in the front row of the Valentino fashion show … and judging by the pictures, it looks like they arrived EXTRA early to make sure they didn’t miss this one.

Check out the pics from Kim Kardashian and Kanye West’s Paris Fashion Week takeover below: