GOSSIPONTHIS.COM Celebs Beyonce, Jay-Z and Blue Ivy Jet Out Of Paris … After Jay-Z... 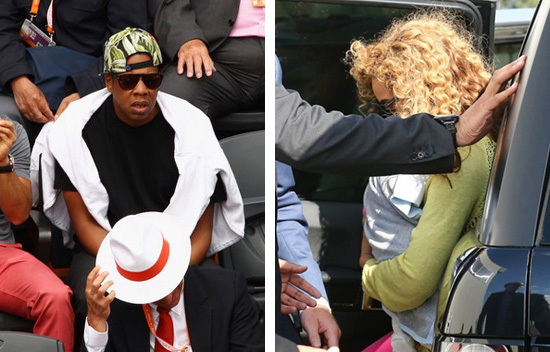 Beyonce and Jay-Z were spotted with their daughter Blue Ivy outside an airport in Paris Friday (Jun 8) as the trio stepped out of their black Range Rover on their way out of the city. Earlier that day, French photogs caught Jay-Z in the crowd at the 2012 “Tournoi de Roland-Garros” — also known as the French Open — watching the Men’s singles semi-finals.

Immediately after the tennis match-up, Jay-Z met up with his wife and daughter at the airport, where they boarded a private plane to make their way to Jay-Z’s “Watch the Throne” concert in Dublin, and to celebrate Kanye West‘s birthday, which was also the same day.

Sounds like Friday was a busy day for The Carters, to say the least!

Check out the pics (via The YBF) below: