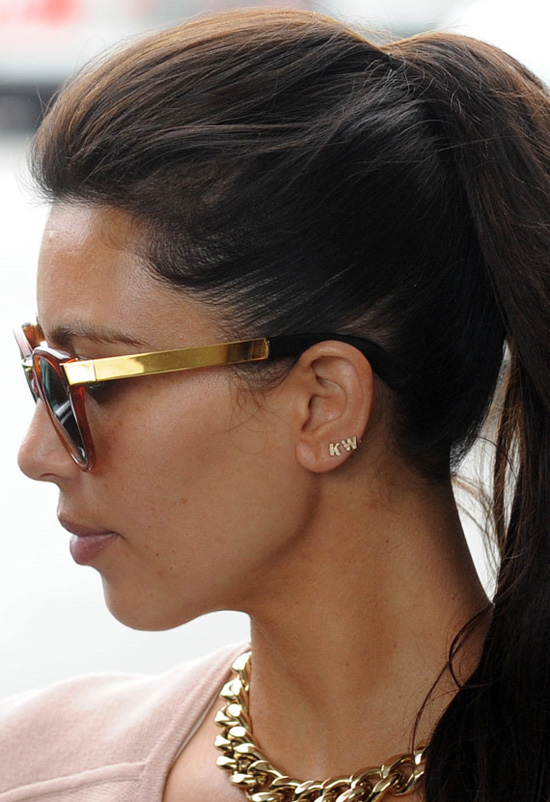 Kim Kardashian may very well be back in love again … or something. The reality star was recently spotted wearing her alleged new beau Kanye West’s initials in her ear.

Kim was photographed flaunting gold and diamond studded earrings with the initials “KW” in her left ear as she arrived at LAX airport in Los Angeles on Sunday (Apr 22).

Maybe spending the past weekend together in NYC helped cement their love? In just a few short days, the new couple has been spotted out in NYC shopping at Balenciaga, enjoying ice cream from Van Leeuwen’s, and having dinner with the entire Kardashian clan at new hip restaurant Spice Market Saturday night (Apr 21). Although no official statement has been released from their camps regarding this so called “relationship,” Kim flew to Kanye’s fashion show in Paris back in February, sat in the front row and was dressed head to toe in clothing from his line. Just two short months later, on April 5th, “Kimye,” as their fans affectionately call them, made their ‘romance’ public by stepping out in the Big Apple dropping by FAO Schwartz, Serafina’s and Jeffrey’s.

The couple had also been spotted by paps leaving a screening of the “Hunger Games” together; and the next morning, photogs caught Kim leaving Ye’s apartment wearing the same clothes she had on the night before, doing the so-called “walk of shame.”

In addition to all of that, Kanye says in his new song “Way Too Cold (formerly named Theraflu),” which was released earlier this month:

SMH … Those two are something else!

Get a closer look at Kim’s new “KW” earrings, and check out pics of her and Kanye leaving the Spice Market in NYC  below: