GOSSIPONTHIS.COM Celebs Lil Scrappy Hospitalized After Severe Asthma Attack: “I felt like I was...
19
SHARES
ShareTweet Lil Scrappy is lucky to be alive right now … becasuse the Atlanta rapper was hospitalized Tuesday after suffering a severe asthma attack.

“I damn near died … if it weren’t for my driver, mom, and rap artist I would have been dead,” Scrappy told TMZ.

Scrappy says he had been heavily drinking Monday night and when he woke up Tuesday morning could barely breathe or talk. “I felt like I was dying,” he said.

He was immediately rushed to the Emory University Hospital in Atlanta, where he was treated and later released.

Scrappy now owns a breathing machine and plans on taking it everywhere he goes. “I will never leave anywhere without it again,” he said. 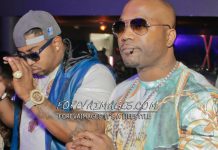