After Miley Cyrus was spotted on the red carpet of various events with her on-and-off boyfriend Liam Hemsworth with what looked like an engagement ring on her ring finger, many began to speculate that Cyrus and Hemsworth were engaged. Cyrus has also been snapped with the ring on several times during the last few days, and she was also wearing the ring at Muhammad Ali’s Celebrity Fight Night XIII event in Phoenix, Arizona.

But it’s not an engagement ring, according to sources close to the former Disney star, who also took to Twitter to personally clear the rumors up. She tweeted:

“I’m not engaged…I’ve worn this same ring on this finger since November! People just wanna find something to (talk) about! It’s a topaz people!”

Miley Cyrus and Liam Hemsworth have dating on-and-off since 2009, when they were first spotted sharing a kiss on the set of their movie “The Last Song.”

Check out more photos of them at Muhammad Ali’s Celebrity Fight Night XIII below: 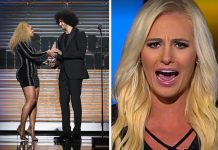 Beyoncé Surprises Colin Kaepernick With Muhammad Ali Legacy Award, Tomi Lahren Dragged on Twitter After Trying to Come for Them