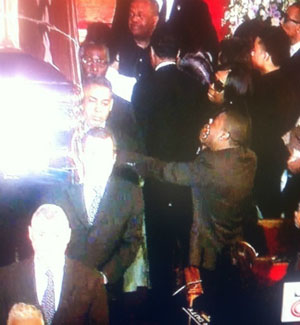 One of the most touching moments during Whitney Houston‘s beautiful funeral service yesterday was when her chrome casket was led out of the church while her song “I Will Always Love You” played in the background. As the casket was carried down the aisle, Ray J, who was seated near the front of the church with his sister Brandy, touched the side of the coffin, covering his mouth and breaking down into tears before falling into an inconsolable weep.

Ray J is rumored to have been romantically involved with Whitney on-and-off, and was seen out with the 48-year-old singer in L.A. the week before she died in Beverly Hills.

“Over the past few days I’ve tried to process the emptiness that I am experiencing. What my heart feels cannot be expressed in words,” the singer/rapper/producer said in a statement released the day before the funeral.

He continued, “The world lost an icon but I lost my close friend. Nippy I miss you so much! You were so happy and full of love. Your smile will live in my heart forever.”