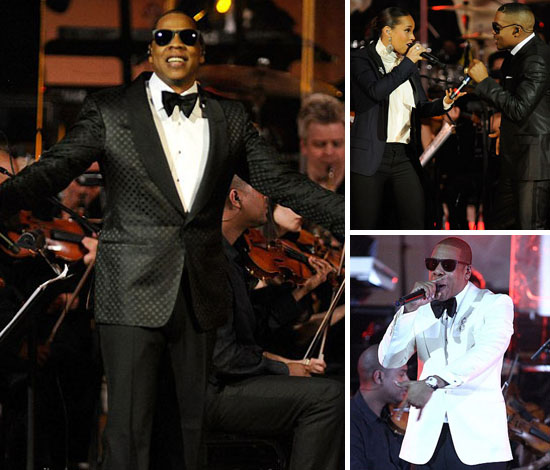 Jay-Z made history Monday night (Feb 6) as he put on a show at Carnegie Hall.

The Roc Nation CEO –backed by a full, 36-piece orchestra — performed several hits from his musical catalog, including the opening numbers “PSA” and “Thank You,” as well as other songs like “Heart of the City,” “Big Pimpin,” “Jigga,” and “Young Forever.”

The New York City native was joined by Alicia Keys for their famous “Empire State of Mind” single, and he also performed with fellow New York rapper Nas for “N.Y. State of Mind,” before Alicia Keys joined the latter for a performance of “If I Ruled the World.”

Jay-Z, who dressed up in two different tuxes (one white, one black) and later dressed down in a black t-shirt, also performed several other songs, including his “Glory” track dedicated to his month-old daughter Blue Ivy Carter. “I didn’t think I was gonna make it through that one, that was tough,” Jay said at the close of the number.

Celebrities in attendance at the concert included everyone from Liza Minnelli to CC Sabathia of the New York Yankees, to even his wife Beyonce, who stepped out in a sexy red dress for the first time since giving birth to their daughter Blue Ivy Carter a month ago today.

According to MTV, last night’s show was one of the two concerts held at the Stern Auditorium at Carnegie Hall to benefit the the Shawn Carter Scholarship Foundation and the United Way of NYC in an effort to raise money for gifted high school students who aren’t financially positioned to attend college.

Peep the photos and video footage below: