The all-new cast for “Celebrity Apprentice” Season 5 has been announced!

“I just think we have a major group of celebrities, and we have a very iconic group,” the show’s host Donald Trump said. “This is the best cast we’ve ever had, the biggest cast, and it’s going to be special.”

“We’ve never seen such a smart and funny group as this year’s lineup of celebrities,” the show’s executive producer Mark Burnett said in a statement about the upcoming season.

The newest of Donald Trump’s “Celebrity Apprentice” is scheduled to premiere on February 12th at 9pm on NBC.

Will you be watching Celebrity Apprentice Season 5? 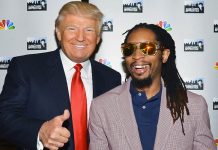 Lil Jon: Yes, Donald Trump Called Me “Uncle Tom” and I Had to Tell Him to Stop