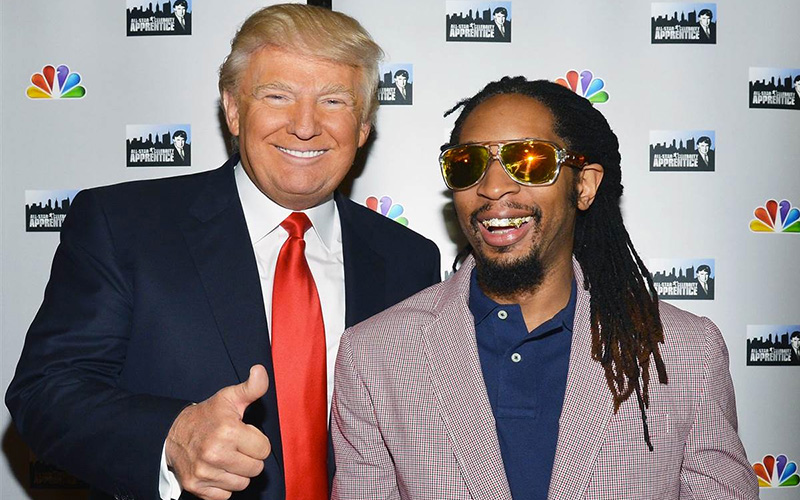 On Friday (Oct. 14) reports surfaced about some of Donald Trump and rapper Lil Jon’s interactions while on-set of Trump’s reality TV show Celebrity Apprentice. According to The Daily Beast, during an episode that aired in 2013, the contestants were tasked with promoting hair-care products. Lil Jon decided his best bet was to rock an Uncle Sam costume.

According to staffers on the show, once Trump heard about this, he began referring to Lil Jon as “Uncle Tom” rather than Uncle Sam.

Apparently it got so bad that executive producers of the show had to call him directly to plead with him not to say it. Trump’s response? “No, that’s a saying, it’s Uncle Tom.”

Well, Lil Jon has come out in response to this news via Twitter later in the day. Basically, he says that he doesn’t know if Trump was just ignorant into the meaning of the term or not, but once they explained its offensiveness, he backed off.

He also wanted to be clear in saying that he doesn’t agree with many of Trump’s statements made during his campaign.

Lil Jon isn’t the only contestant to be insulted by Trump, though. In an earlier season, staffers reported that Trump called Marlee Matlin — the deaf comedian — retarded. Staffers also said Trump called Khloe Kardashian a “piglet” and fired her because she wasn’t hot enough.

I find it hard to believe that this was simply an accident on Trump’s part. I mean, he’s repeatedly bragged about how smart he is, but he didn’t know this was offensive? Regardless, Lil Jon doesn’t seem too upset, so we’ll just chalk this up to another dumba$$ moment from the Donald.