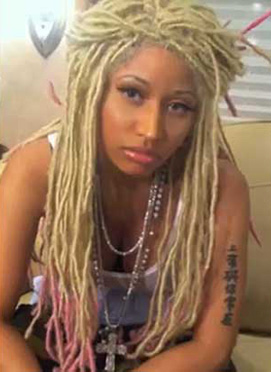 Nicki Minaj has one hell of a sense of humor!

The rapstress recently mocked her Young Money boss Lil Wayne and his 30-minute “public service announcement” released earlier this month by doing her own rendition in a much shorter clip.

Decked out in camouflage pants, a white tank top, some bling and her now famous blonde dreadlocks, Nicki Minaj did her best Weezy impersonation, as the “Female Weezy,” keeping a straight face throughout the entire 7-minute video, which was shot on location in Miami during a break on the set of Birdman’s “Y.U. Mad” video (featuring an appearance from the Female Weezy and Lil Wayne himself).