Stare into the crystal blue eyes of ladies man Leonardo DiCaprio as he covers the October 2011 issue of GQ Magazine.

Check a few excerpts (via Just Jared) from his cover story below!

On if he has any interest in directing:
“Yeah, I do. And if I did direct, I would try to have the same no-bulls— approach to it as [Clint Eastwood] and his crew have. Seriously, there are no frills on his set. It’s a small, tight-knit crew.”

On which movie he’s proud of:
“The Aviator. I’d wanted to play Howard Hughes for 10 years and was around for multiple rewrites. Michael Mann was on it at one point. And finally [Martin] Scorsese got involved. I was very proud of that movie. It was the first film where I felt inherently like a partner.”

On a movie he originally passed on, then changed his mind:
“My father has always been a huge force with me. I had passed on a script about the French poet Arthur Rimbaud [Total Eclipse]. He explained to me that Rimbaud was the James Dean of his time … I did the movie, and I loved playing him. If I just waited for moments of ‘I have to do this,’ I would do a movie only every four or five years.” 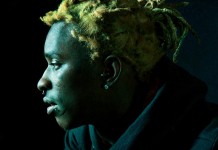