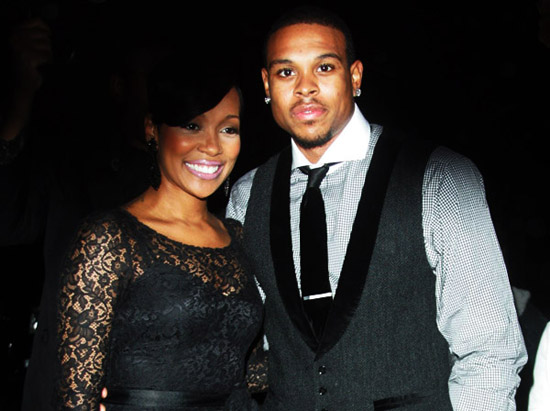 The couple secretly married back in November of last year … and decided to have a much bigger wedding in front of their close  friends and family last night at Vibiana, a renovated 19th century cathedral in downtown Los Angeles.

The bride, 30, wore a gown by Stephan Roland for the 30-minute ceremony, which was attended by guests including Lala Vazquez, Carmelo Anthony and teammates Kobe Bryant and Derek Fisher.

The newlyweds then planned to join their guests, who had been asked to wear shades of blue to the event, for cocktails and a lavish reception planned by event planner Mindy Weiss.

The purple and blue-themed reception featured a three-course sit-down dinner at tables decorated with centerpieces of hydrangea and roses by Mark’s Garden. Afterwards, hamburgers from Fatburger were grilled for guests under a tent.

The couple met last summer when Brown appeared in Monica’s video “Love All Over Me.” They were engaged in October and married in a secret ceremony at their Los Angeles home a month later.

Monica has two sons, Rodney Jr., 6, and Romelo, 3, with ex-fiancé Rodney “Rocko” Hill. Brown, 25, also has a son from a previous relationship. The children arrived at the ceremony by horse and carriage.